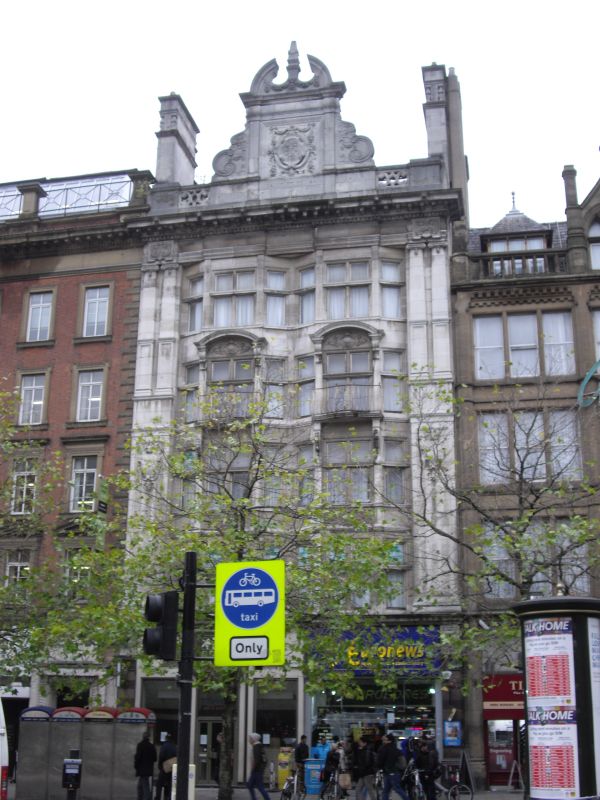 Textile shipping warehouses, one of mid-to-late C19 date, and one of 1904 by W and G Higginbottom, both with ground floor shops and later used as offices, with the upper floors altered for hotel use in the late C20.

PLAN: long C-shaped plan at right-angles to the street.

EXTERIOR: prominently sited in the centre of the block at the south east corner of Piccadilly Gardens, terminating long views up Portland Street.

Designed in a Baroque style, five storeys high and two bays wide. Above the modern shop frontage at ground floor*, the building is symmetrical. The principal façade comprises two side-by-side, four-storey canted bays, the sides slightly recessed. The windows to each floor are transomed, with a central mullion in the principal window. Cartouche panels fill the spandrel below the second-floor windows. The third-floor bays have a balcony (with iron balustrade) supported on consoles reaching down to the second-floor transom, and above, open-pedimented segmental architraves with central cartouches. The windows are timber casements. The façade is framed by broad pilasters in two vertical stages, the lower half panelled with cartouches at the top, and the upper half treated as pairs of Ionic pilasters on panelled pedestals. Panels lettered ‘AD’ and ‘1904’ flank a pulvinated frieze below a prominent modillioned cornice with egg-and-dart enrichment and small lions-head grotesques. The parapet has two pierced panels with very large Flemish gable framing a garlanded cartouche lettered 'CB 1904', with a fruity broken semi-circular pediment with central obelisk. Tall end chimneys are enriched with cornices and corner baluster-carvings.

The elevations to the courtyard shared with Nos. 55-57 are of white glazed brick or tile with late-C20 windows* and corrugated metal sheet roofs*. The rear elevation to Back Piccadilly is set back from the pavement, in the same brick with wide strip-windows* and a full-width dormer*, and a stone basement-area wall. The party walls are of red brick with stone parapet copings.

INTERIOR: the former offices and warehousing has been heavily subdivided* for hotel use with access through the side elevation from the courtyard shared with Nos. 55-57, and bathroom fittings in each room*. The original well-winder stair survives (with its glazed-tiling dado (some painted) and some architraves, plus the later wrought-iron lift cage. The front block is interconnected at each floor with Nos. 55-57 via inserted openings through the party walls. The shop unit is very tall with a corniced ceiling visible above some suspended sections*. There are some iron columns visible in the lower levels at the rear, in an irregular pattern.

PLAN: long reverse C-shaped plan at right-angles to the street.

EXTERIOR: prominently sited in the centre of the block at the south east corner of Piccadilly Gardens, terminating long views up Portland Street.

In an eclectic style with Gothic accents, of four storeys plus an attic, and three bays wide. The façade is symmetrical, with a narrower central entrance bay and wider outer bays all framed by hollow-chamfered pilasters with volute stops. Moulded head and sill bands separate the floors, with a double dentilled frieze over each bay. The balustraded parapet is broken in the centre by a gable flanked by chamfered square pinnacles, with hipped dormers to either side. The ground floor has a tall segmental-headed doorway with moulded surround, flanked by C21 shop windows*. On the upper floors there are three-light windows in the outer bays and two lights in the centre, all with ovolo mullions between, and the attic gable has a pointed-arched window with a transom and Y-tracery, and the dormers have three-light casements; the windows are uPVC*. There are apex finials to the attic (stone to the gable and lead to the hipped roofs) with stone end chimneys. Late C20 signage has been affixed.*

The elevations to the courtyard shared with Nos. 51 and 53 are in metal profiled cladding* to both walls and roofs, with late-C20 windows*. The rear elevation to Back Piccadilly is clad at ground floor in red granite* (with some stone visible where this is missing), and at first and second floor in white glazed tile or brick. The upper windows are predominantly wide openings with painted stone mullions, although all windows are late C20 replacements*. There are two stacked full-width dormers*. The party walls are of red brick with stone parapet copings.

INTERIOR: modern shop interiors at ground floor*. The entrance has eight stone steps in two flights, now clad in red granite*, and a timber panelled and coffered ceiling and double part-glazed panelled doors with five decorative leaded lights above. Beyond this the hall and stair have decorative plaster ceilings. The front block contains an entrance hall and original dog-leg stair with open string, scroll-work iron balustrade, timber newel and some original ramped skirting. A modern lift* occupies the lift-shaft inserted before 1917. An arch with inserted doors* gives onto the former courtyard beyond, which is partly covered by a modern glazed roof*. This houses reception and above this are four floors of accommodation, possibly a late C20 insertion. The rear block abuts Nos. 51 and 53 and interconnects at various levels. The location of the original warehouse hoist is now used as a store room. The upper floors are heavily subdivided for hotel use* with bathroom fittings in each room* and interconnect with Nos. 51 and 53 via inserted openings through the party walls.

*Pursuant to s.1 (5A) of the Planning (Listed Buildings and Conservation Areas) Act 1990 (‘the Act’) it is declared that the following aforementioned items are not of special architectural or historic interest: late C20-C21 shop fronts and fittings; late C20 uPVC and metal windows; external metal cladding to walls and roofs; roof dormers to Back Piccadilly; non load-bearing internal partitions; hotel bathroom fixtures; late C20 signage to front elevation; red granite cladding to the rear external wall and to the entrance hall & steps; lift cars; late C20 doors and glazed roof to reception.

The Gardens Hotel occupies two buildings; Nos. 51 and 53 and Nos. 55 and 57 Piccadilly. Nos. 55 and 57 is the older building, being built between the survey for the OS 1851 1:2500 map and the 1886 Goad Fire Insurance plan which shows this building as a shipping warehouse occupied by Horrockes, Miller and Co. This was probably the original function of the building. At this time it had a shop either side of the central entrance, a skylight over the stairwell and a closed hoist towards the rear of the building. The small courtyard which is still evident was glazed over.

Nos. 51 and 53 are dated 1904. The 1917 Goad Fire Insurance plan shows a drugstore in the shop unit, with the rest of the building housing offices and various warehouses accessed by a stone stair lit by a skylight. The courtyard behind was glazed. This map also shows that Nos. 55 and 57 were, by this time, the general offices of the Manchester Corporation Tramways but were little altered other than the addition of a lift to serve the front half of the building and some openings into the neighbouring building, Nos. 59-61. By 1960 the Manchester Corporation Transport Dept. general offices occupied both buildings and a lift had been inserted into the stairwell of Nos. 51 and 53. By 1970 Manchester College of Arts and Design occupied them.

Horrockses, Miller and Co was a Preston-based cotton textile manufacturing partnership formed in 1815 by John Horrocks, jnr and based on the company founded in 1791 by his father. In 1882 they employed 3000 hands, operating 150,000 spindles on 3100 looms and were by far the largest manufacturer in Preston. In 1928 Manchester Corporation Tramways (founded in 1901) peaked at 328 million passengers, on 953 trams, via 46 routes, along 292 miles (470 km) of track. The only larger service in the United Kingdom was that of the London Passenger Transport Board after the services of 16 operators across the capital were combined in 1933.

The Gardens Hotel, comprising a textile shipping warehouse of mid-to-late C19 date, and another of 1904 by W and G Higginbottom, both with ground floor shops and upper floor offices, is listed in Grade II for the following principal reasons:
* Design interest: of the earlier warehouse as an eclectic example of the Manchester Palazzo style, and of the well-detailed Baroque 1904 block;
* Streetscape contribution: to this central city space and as the terminator to views along a principal historical commercial street.
* Group value: with No. 49 to the left (Grade II) and with Nos. 59 and 61 (Grade II), to the right (in similar style to Nos. 51 and 53 by the same architect);
* Historic interest: of the Manchester shipping warehouse for Preston-based Horrockses, once one of the largest textile concerns in the world, and for the later use as the general offices of the Manchester Corporation Tramways, probably from its inception in 1901.