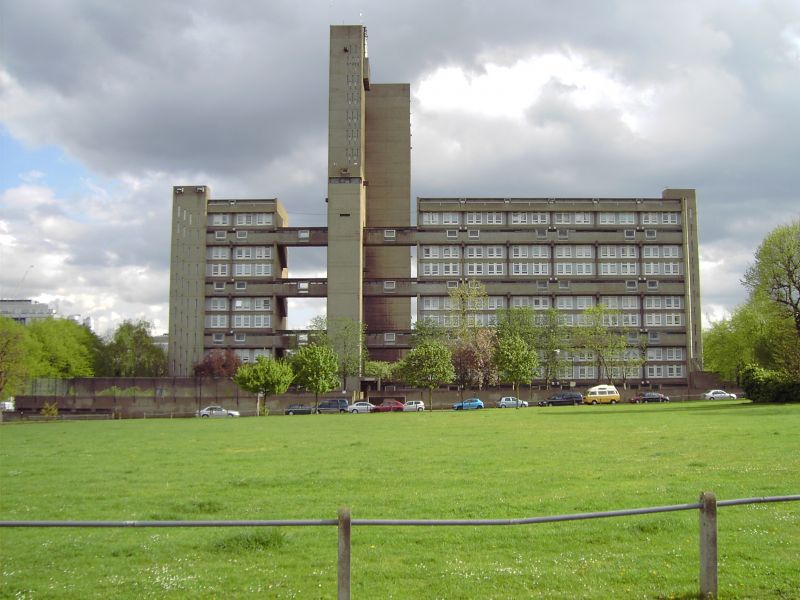 Mixed development public housing scheme, approved for development by the LCC in 1959 and designed by Ernö Goldfinger from 1963. Built in three phases: Balfron Tower, old people’s housing and shop in St Leonard’s Road, 1965-7; Carradale House, 1967-8; Glenkerry House (1972-5), 2-24, 26-46 and 48-94 Burcham Street and Burcham Street Centre, 1972 onwards. The community centre/nursery in St Leonard’s Road was designed as part of phase 2 and built in phase 3.

Block of flats. 1967-8 by Ernö Goldfinger for phase 2 of the LCC Brownfield Estate, refurbished 2012.

PLAN: block of 88 flats in eleven storeys. Set out in a dynamic plan to ensure the flats were not deprived of sunlight, in which they are placed in two groups of respectively six and two units per floor, west and east of a central lobby housing lift shafts, stairs and refuse chutes, to which they are connected only at ground, third, sixth and ninth floors. A mix of one- and two-bedroom flats, denoted externally by the different size of balcony on the south-facing elevations and planned on the same principal as Balfron Tower with the smaller flats accessed directly from the corridor and dual aspect flats, with internal stairs, above and below.

EXTERIOR: on the south elevation balconies are full width in the outer bays and half width in every third floor of the inner bays. Windows are set back and are full-height with clerestory lights, the bays lined with cedar boarding (renewed) adjacent to the crosswalls. The staircase tower has slit windows in a stepped pattern in groups of three. The starker north elevation has paired groups of windows between precast panels but overlooks the turfed podium created by garages below. Because Carradale House shared Balfron Tower's boiler, the top of this tower does not project but has gargoyles resembling those used by Le Corbusier in his later works. Entrances are beneath projecting concrete canopies, the north and south entrances reached across bridges. That on the north side has original lettering mounted to the side; there is a further entrance into a stair tower at the western end of the block. Hardwood timber doors to common areas have vertical glazed panels and full height moulded handles; some doors are renewed. All windows are renewed but have been carefully designed to respect Goldfinger's original design.

INTERIOR: original tiling has been replaced in the common areas; some original flush panel doors remain. In the lift lobbies, doorways have robust shouldered concrete frames similar to those in Balfron Tower and the lobbies have coffered ceilings. Like Balfron Tower, stair wells are well lit and stairs have steel balustrades. Some flats are said to retain original fixtures and fittings.

Pursuant to s.1 (5A) of the Planning (Listed Buildings and Conservation Areas) Act 1990 (‘the Act’) it is declared that all plant and services are not of special architectural or historic interest and are excluded from the List entry.

The Brownfield estate, or Rowlett Street estate as it was known at the time, was developed by the LCC who, short of in-house capacity, approached the architect Ernö Goldfinger.

In 1951 Poplar Borough Council approved a programme to build 300 dwellings on the Tetley Street site to the south and west of Rowlett Street. Before the first block (Langdon House) was completed, the LCC assumed responsibility for developing the area as an eastern extension to the Lansbury estate and part of the wider Stepney and Poplar Reconstruction Area, and in May 1955 approved designs by the Architect’s Department for a low-rise development of 354 dwellings at a density of 142 persons to the acre (ppa). It consisted of a mixture of 2-storey terraces, 4-storey maisonette blocks and 2/3-storey blocks of flats. Construction commenced in early 1957 and was substantially complete by 1961. The site was named the Brownfield Estate in July 1958 after an existing road, itself named after a local doctor.

EVOLUTION OF THE SCHEME
Rowlett Street Stage I
The LCC in May 1959 approved an estimate of £50,400 for the acquisition, clearance and partial redevelopment of the first of three extensions to the Brownfield Estate, prompted by clearance and the construction of the Blackwall Tunnel approach; the site was developed in stages to facilitate site acquisition and the rehousing of residents. The density was to be increased from 170ppa to compensate for land take for the Blackwall Tunnel.

Having approached Goldfinger in October 1962, the following month the LCC produced a sketch layout of three 15-storey point blocks as an indication of the type of scheme they anticipated, including the potential for some low buildings for the elderly. When Goldfinger’s scheme was presented to the LCC in June 1963 the LCC architect described Balfron Tower as a ‘landmark’ building and commented that ‘a high sense of visual drama would be achieved while emerging from the Blackwall Tunnel’. Detailed Stage I proposals received approval in February 1964; the contract started on site in June 1965 and was completed in October 1967, with a topping out ceremony on Balfron Tower on 22 February 1968.

Rowlett Street Stage II
Goldfinger was briefed about a future site extension as early as February 1963 and at the outset prepared sketches for the complete site [ie phases 1 and 2]. Thus the first two phases were planned as a whole, to be executed in two halves, and densities and dwelling types were calculated in aggregate. Although delay had been anticipated, phase 2 was however held back by the LCC’s decision to rehouse in Balfron Tower residents who had been displaced by the site clearance. The LCC authorised the acquisition of the Stage II site in November 1964; Goldfinger received a formal commission in December 1965, and in July 1967 his proposals for Carradale House were accepted.

Rowlett Street Stage III
The LCC reported in December 1966 that the land south of Burcham Street would be redeveloped to provide 129 new dwellings. At 2.89 acres gross, stage III was the largest site but was developed less intensively than the preceding phases (174 ppa compared with 216 for phase 1 and 205 for phase 2). Additionally it was subject to economies imposed by the new Housing Cost Yardstick (government policy introduced to control public sector housing costs). A drawing from December 1969 (RSHIII/109) shows the rudimentary Glenkerry House, three low-rise blocks, community building and car park block to the west in relation to the existing Balfron Tower and Carradale House. Perspective drawings of early 1970 depict Glenkerry House and the low rise blocks fronting Burcham Street. Glenkerry House was built between 1972 and 1975, and the project was complete or nearing completion by 1976. The relatively long development period was characteristic of the 1970s.

Ernö Goldfinger
A Hungarian émigré, born in Budapest, Ernö Goldfinger (1902-1987) moved to Paris in 1920 and to London in 1934. He stands out as one of the only architects trained under Auguste Perret at the École des Beaux-Arts in Paris in the 1920s, and who was closely involved in the early years of the Modern Movement on the Continent, to find acceptance in Britain. He is held in high regard as a major exponent of these ideas in England in the post-war period. Firmly rooted in Perret's Structural-Rationalism, he was strongly influenced by Le Corbusier's social idealist views and architecture, embodied in the slogan ‘Soleil, Espace, Verdure’ (sun, space, greenery). The Brownfield estate epitomises these ideas and the Balfron Tower in particular is one of the closest parallels to European modernism to be built in this country.

Having first produced designs for housing in 1929 in Algiers, Goldfinger went on to develop ideas for high-rise housing, culminating at that time in a scheme for a 24-storey communal housing scheme, again unbuilt, but exhibited at the CIAM (Les Congrès Internationaux d'Architecture Moderne) conference in Athens in 1933.

CARRADALE HOUSE
Carradale House was designed as the second phase of the Brownfield or Rowlett Street Estate, as work on Balfron Tower was beginning in 1965-6. It was thus that the boiler house on the top of Balfron Tower was expanded (to also serve Carradale House) and assumed its distinctive form, which was then repeated as an architectural device at both Trellick Tower, Cheltenham Estate and Glenkerry House, Brownfield Estate. Balfron Tower and Carradale House form two sides of a public area, served by raised walkways, the relatively long and low form of the latter complementing the tall block of Balfron Tower. It is a distinctive, unique reworking of the ideas first embraced in Balfron Tower, taking the planning idea of a corridor only every third floor to increase speed of lift service, neighbourliness and internal space, but with a refinement of detail more characteristic of Trellick Tower, with which it is more comparable in date. Carradale House is set back spaciously from the streets by a turfed moat-like area planted with trees and above garaging, and approached by walkways and bridges that separate pedestrians from vehicular traffic below.

Carradale House, 1967-8 by the eminent modernist architect Ernö Goldfinger for phase II of the LCC Brownfield Estate is listed at Grade II for the following principal reasons:
* Authorship: designed and planned by Ernö Goldfinger, a major exponent of the European Modern Movement in Britain and an architect of international standing;
* Architectural interest: in its striking split form and external modelling, designed in direct response to Balfron Tower, and a development of the model established in the earlier tower;
* Materials and construction: concrete aggregate, exceptionally fine bush hammered concrete finishes maintaining the consistency in planning, palette of materials and aesthetic applied across the estate;
* Planning interest: laid out according to Goldfinger’s Corbusian-inspired interlocking arrangement of flats and maisonettes, three per bay, served by enclosed access galleries at every third floor;
* Degree of survival: little-altered in its external form, it stands within a planned space, in which it has a particularly strong, Corbusian, planning, visual and aesthetic relationship with Balfron Tower and also with the later Glenkerry House;
* Social and historic interest: phase 2 of an LCC mixed development, principally of high rise blocks, designed to re-house a local community within a carefully planned integrated landscape;
* Group value: Carradale House has strong group value with Balfron Tower and the space within which it stands, but also with other low-rise and high-rise elements of the estate.