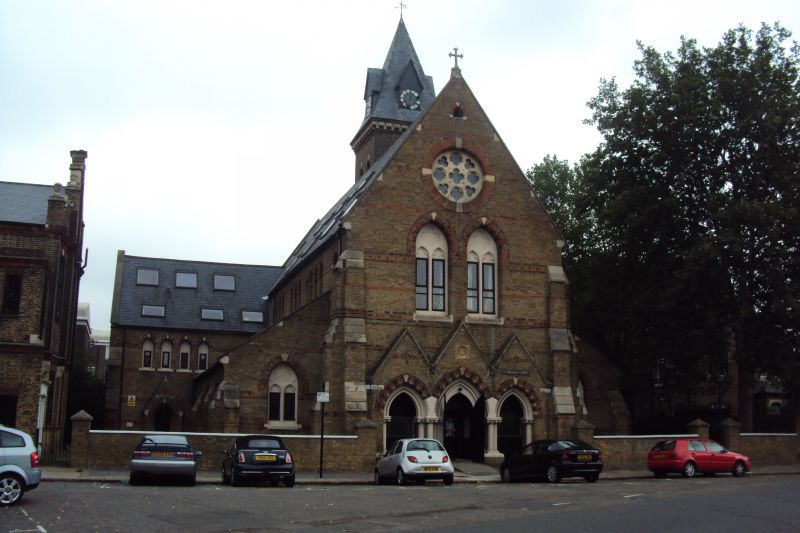 MATERIALS: Stock brick with a little red and black brick polychrome banding and also polychrome to the heads of the arches. Limestone dressings. Slate roofs.

EXTERIOR: This large polychrome brick church draws Early English architecture of the C13 for its details. The most prominent features are the W end, fronting directly on to St Leonard's Road, and the SE tower. The former has a triple-arched entrance with moulded arches and shafts in the reveals, all under polychrome heads. Above these are three straight-sided gables. The W end fenestration has two two-light openings with modern detailing above which is an oculus filled with plate tracery comprising trefoils and quatrefoils. At the corners are angle buttresses. The aisles have lean-to roofs and two-light windows in their W faces. The tower is unbuttressed and has three stages. The largest of these is the belfry stage which has tall, plain paired openings. Above is a short, slate-covered pyramid spire with a gable on each side over a clock face. The E end of the chancel has an E window of three graded lancets. There are paired windows in the lean-to aisles and there is a clerestory with three single light windows per bay. In the angle between the nave and S aisle there is a quarter-round stair turret. Conversion into flats has led to the roofs being interspersed with numerous square skylights.

INTERIOR: The interior has been divided up and filled with multiple flats.

SUBSIDIARY FEATURES: Immediately S of the church is a large, former vicarage, built of stock brick with minor details of polychromy in a matching style to the church. To the S of this is a Portland limestone First World War memorial by A R Adams, 1920, depicting Christ blessing a medieval soldier. To the N of the church is a two-storey institute built of stock brick with its gable facing the church. Together these form a group.

HISTORY: The present building was erected in 1864-5 to replace a mission church of 1861. It was restored in 1901 and again in 1955. Now it has been converted into flats. Morris, the architect, is not a well-known name, but was clearly capable of ambitious and impressive designs, as here.

REASONS FOR DESIGNATION:
The former church of St Michael and All Angels is designated at Grade II for the following principal reasons:
* It is a High Victorian brick former church (now converted into residential accommodation) in the C13 style with polychrome detailing and a prominent tower which forms a local landmark, in this much-altered area.
* The external interest is high enough to offset the major changes to the interior, which is now deprived of special interest.
* The church, vicarage, institute and war memorial form a coherent group.