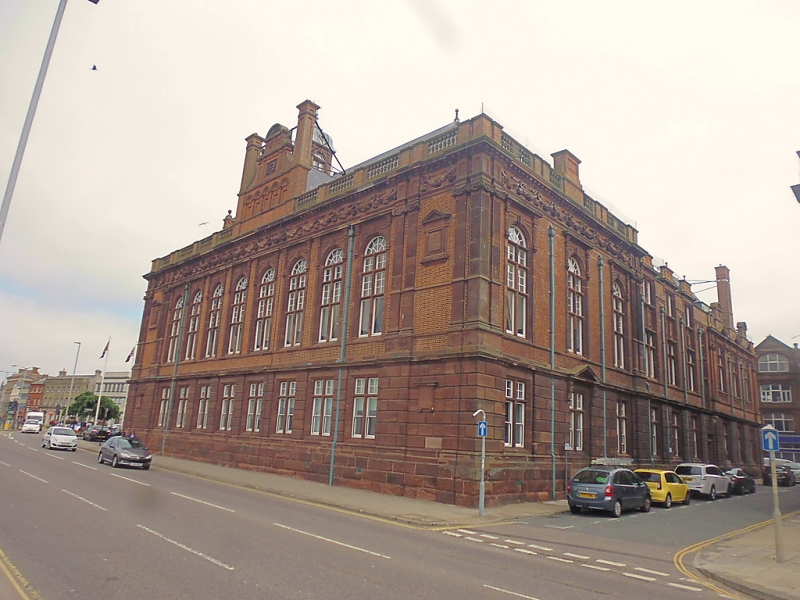 Town hall. 1882. By JB Pearce after a competition. Red brick
laid in Flemish bond and with terracotta details and sandstone
dressings. Slate roofs. Built round a narrow courtyard. Queen
Anne style.
EXTERIOR: 2 storeys rising to 3 in the tower. Asymmetrical
entrance front to the north-west. 7-window range. Rusticated
ground floor and string courses between the floors. To the
left are 3 bays of cross casements fitted with plate-glass
horned sashes. The first-floor windows have 2 transoms. Small
pediments in the balustraded parapet. These bays have paired
pilasters right and left. The centre bay has one 3-light cross
casement (with sashes) to each of its 3 floors. The right-hand
3 bays contain the round-arched principal entrance and two
2-light cross casements as before. Paired pilasters separate
the first-floor cross casements which have the double transoms
and now round heads. Swags in the parapet. A tower, square on
plan, rises through 2 storeys to an ogeed lantern: open round
arches over clock faces; glazed lantern.
The south-west facade faces the river: symmetrical; 8 bays
plus closing bays right and left. Cross casements fitted with
sashes as before. Garlanded parapet and central segmental
pediment. Hipped roofs with flat.
INTERIOR: the entrance hall has pairs of panelled baluster
piers on high plinths alternating with single piers running
down the centre and attached as pilasters to the walls.
Modified Ionic capitals. An Imperial staircase rises to the
east: open string, twisted balusters over vases, moulded
handrail. Pairs of painted glass windows light the stairs from
a small internal courtyard.
The whole of the west side of the first floor is given over to
a ceremonial hall of 9 by 3 bays, the bays divided by fluted
pilasters. The north wall has paired fluted columns and
pilasters, the south wall has Corinthian columns set in front
of pilasters. Heavy modillion cornice with leaf-trail
decoration and deep coving below a barrel-vaulted roof with
eared and shouldered raised panels. The south-east corner of
the first floor was used until 1990 as a magistrates court
with a complete set of fittings from 1882. Panelled bench and
dock, the latter with an internal staircase dropping to a
secure room and side entrance on the ground floor. The council

chamber has a canopy at the west end and a gallery at the east
end.