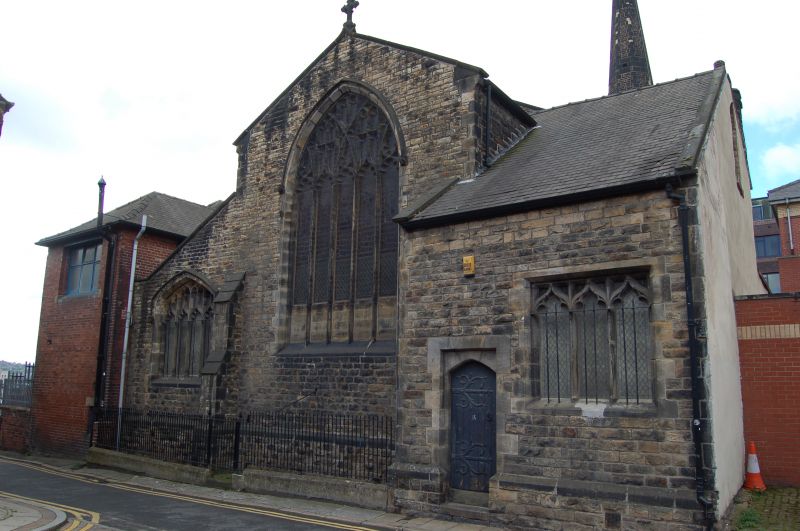 Parish church and attached railing. 1854-55. By Flockton &
Son. Chancel 1884, by JD Sedding. Redecorated c1960 by GG
Pace. Coursed squared stone with ashlar dressings and slate
roofs.
PLAN: chancel and sanctuary, vestry and organ chamber, nave
with clerestory, aisles with lady chapel and baptistry, west
tower with spire.
EXTERIOR: plinth and coped gables. Windows are mainly
segmental pointed arched windows with panel tracery.
Chancel east gable has a 5-light window with hoodmould and
mask stops. Vestry to right has single gable and single side
wall stack and to east, a pointed doorway and an ogee headed
3-light window, both with chamfered flat-headed surrounds.
Outside, a 10m length of spiked railing.
5 bay nave has 5 pairs of 2-light windows on each side of the
clerestory. Aisles have blank sides and at their buttressed
west ends, 4-light windows with chamfered heads and linked
hoodmoulds. South aisle has a similar window to east.
Projecting lower stage of west tower forms the central feature
of the west end. Large canted buttresses flanking a moulded
segmental pointed doorway with a crenellated parapet on which
stands a war memorial Calvary. Above the door, a 4-light
window with hoodmould. Octagonal bell stage has thin angle
buttresses topped with pinnacles, and crenellated parapet.
Plain set back octagonal spire.
INTERIOR: nave and chancel have queen post truss roofs with
wooden wall shafts on corbels. Chancel has double chamfered
arch with angel imposts. South side has chamfered arch into
lady chapel, with wrought-iron screen. C19 stained glass east
window. Sanctuary, in the east bay of the nave, has moulded
alabaster screen wall and wrought-iron gate. Nave has 5 bay
arcades with plain octagonal piers and chamfered arches with
hoodmoulds. Sillband to clerestory. West end has a double
chamfered tower arch with a traceried panelled gallery. Aisles
have plain lean-to roofs and at their west ends, pointed
doorways to the gallery. South aisle has double chamfered
eastern arch with wrought-iron screen and gate into lady
chapel, and at the west end a side door with hoodmould.
Stained glass includes chancel east window 1884, by JD
Sedding. North aisle west window 1902, by Lavers & Westlake.
FITTINGS include octagonal panelled oak pulpit and font with
repousse panels, by HJ Potter, 1903 and 1913. Carved altar and
reredos 1886, by JD Sedding. Elaborately carved stalls.
Entrance screen c1960 by GG Pace.
This church was an important centre of missionary and
charitable activity in central Sheffield in the second half of
the C19.
(The Buildings of England: Pevsner N: Yorkshire: The West
Riding: London: 1967-: 452).