Numbers 85 to 91 and Attached Walls Gates and Gatepiesr 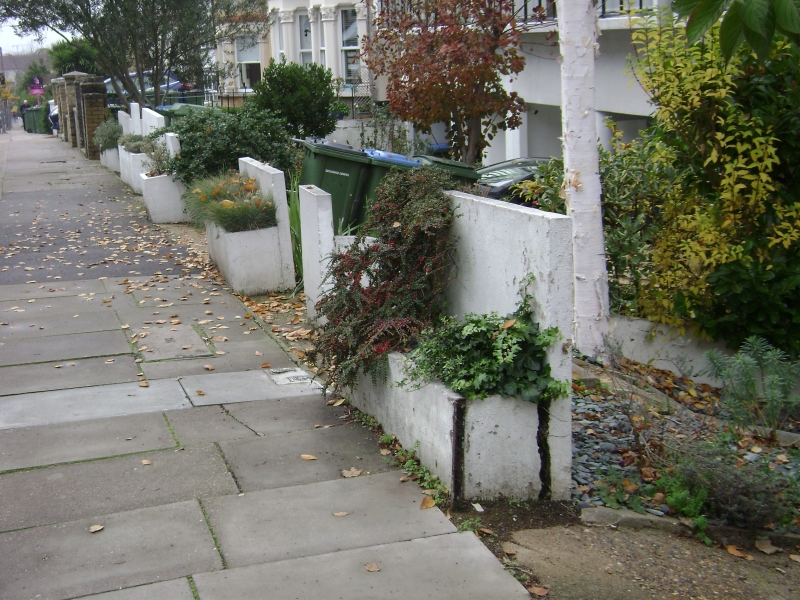 Entry Name: Numbers 85 to 91 and Attached Walls Gates and Gatepiesr

Terrace of four houses. 1933-4 by Berthold Lubetkin, in conjunction with A V Pilichowski who secured the commission from C J Pell and Co. developers. George West Ltd. builders. Monolithic reinforced concrete construction, painted, with flat roof. Narrow frontage houses, 7.7 metres deep, on three floors, the ground floor lower than the road owing to the extremely steep site. Houses arranged in mirrored pairs. Ground floor with entrance halls, loggia rooms and garages, first floors with reception rooms and kitchens, the second floors with three bedrooms and bathrooms.
Entrances set back behind single pilotis to each house, which support the projecting upper storeys, and given further enclosure by curved projection to side. Most houses retain their original Crittall metal doors, and No. 91 has original bell. Garages, set further back, retain original doors. All windows to front are the original Crittall metal frames with side-opening casements, as are those to the rear except where noted. First floor with continuous horizontal windows across facade, each of ten vertical lights with some opening casements, set in projecting concrete frame - a very early use of such a feature. The second floor has a similar five-light window, with to side, doors on to balcony with cyma-curved concrete front and steel sides. This is a very distinctive and classic Lubetkin design, perhaps derived from the Bauhaus but evolved by him into one of the most characterful design features of the 1930s. Rear elevation simpler, though with similar Crittall windows surviving to Nos. 87 and 91 and to the upper floors of No. 85. The small bathroom and toilet windows to No. 89 survive, but the others have been altered. Ground floors originally with open loggias, now infilled with wood or glass but retaining their `garden room' characteristic. The interiors survive remarkably well in all the houses, though No. 91 is the most complete.

Entrance halls with magnesium chloride floors, save that to No. 87 which has woodblock floor. Curved cloakroom in projection to side of front doors. Circular staircases with cupboards underneath, their timber newels scooped out on ground and first floor levels to make semi-circular features, admitting more light and space. A series of curves completes this newel wall at the top of the houses. First floor landing with cork floors. Reception rooms in two halves with square archway between, devised to give a sense of division without loss of space and light, and with two doors opening on to landing to enhance circulation space. On the second floor, No. 91 retains its original bathroom fixtures, with tiled walls and floors. The bedrooms have composition floors. Ladders secured over the stairwell give access via rooflight to flat roofs.
The front and side retaining walls with planting boxes are an important part of the composition, as are surviving gates and gatepiers. The rear gardens incorporate some walling and edgings in their steeply sloping sites.
Lubetkin was an emigre architect from the Soviet Union who settled in Britain in late 1931. This is his first building here, yet it is a confident and mature work which reveals many of the design details which were to appear in his later and better-known public commissions. The houses are the only completed terrace in England built in the modern idiom during the 1930s, and they are remarkably well preserved. Lubetkin himself designed only two other private houses, both in Whipsnade and including one for himself.
Sources
Architectural Review, December 1936
F R S Yorke, The Modern House in England, 1937, p.112
Peter Coe and Malcolm Reading, Lubetkin and Tecton - Architecture and Social Commitment, 1981, p.114 John Allan, Berthold Lubetkin - Architecture and the Tradition of Progress, 1992, pp.163-6