A Grade I Listed Building in Nottingham, Nottingham 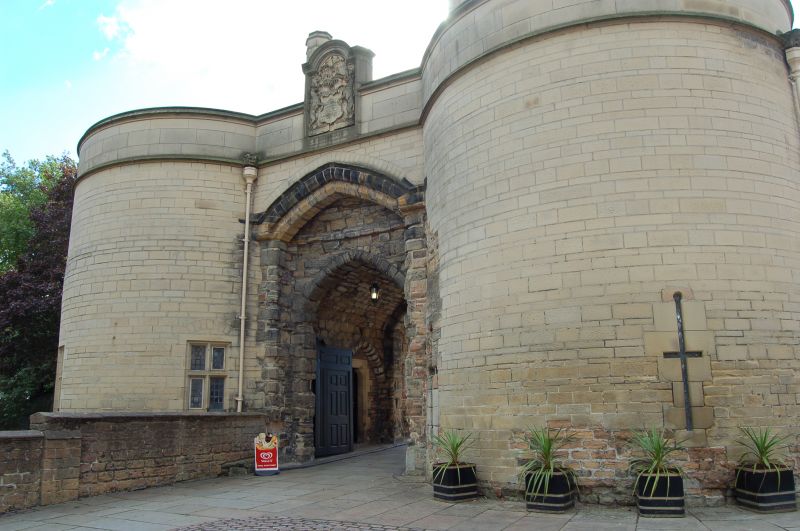 Castle gatehouse, outer bridge, and adjoining gateway.
1252-1255, for Henry III. Altered mid C16. Slighted, 1651.
Restored and gateway added, 1908. Ashlar, with ashlar
dressings and stone slate roofs, with 3 octagonal ashlar
stacks. Parapet, string course and cross casement windows, all
early C20.
Gatehouse has a pointed arched entrance with hood mould,
flanked by round towers. 2 windows to left. Over the entrance,
a segment-arched panel with the City arms. Panelled double
doors. Under the arch, a pointed barrel vault, 2 bays, and
pointed arched recesses with shouldered doors.
Outer bridge, spanning the moat, has a chamfered pointed arch
with hood mould, and 4 chamfered ribs. Smaller round arch, mid
C16, replacing the drawbridge. Parapets restored 1908.
Rear, mostly 1908, has a pointed arched gateway with a doorway
to its left, both C13. Beyond, two C20 windows. To right,
small gabled addition.
Adjoining gateway, to left, has wrought-iron double gates with
square piers and finials, and smaller side gates. Adjoining
the gatehouse, a semicircular kiosk.
An important survival of the medieval castle.
(The Buildings of England: Pevsner N: Nottinghamshire: London:
1979-: 225-228; Get to know Nottingham: Hamilton A:
Nottingham's Royal Castle: Nottingham: 1980-: 2,9).