Statues of Robin Hood and his Merry Men 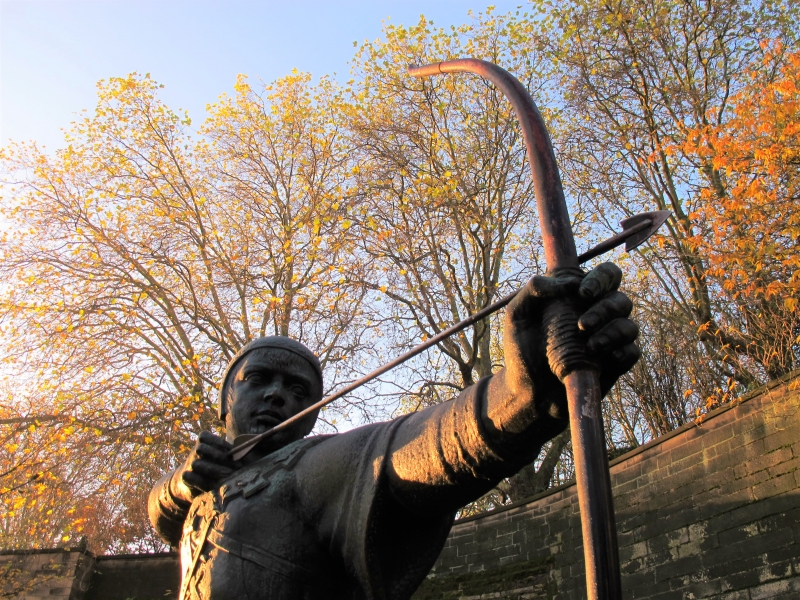 Entry Name: Statues of Robin Hood and his Merry Men

Group of three stylised sculptures of Robin Hood and his Merry Men, unveiled in 1952, designed by James Arthur Woodford.

Group of three stylised sculptures of Robin Hood and his Merry Men, unveiled in 1952, designed by James Arthur Woodford.

Robin Hood was a heroic outlaw in English folklore, and a highly skilled archer and swordsman. He became known for ‘robbing from the rich and giving to the poor’, assisted by a band of outlaws known as his ‘Merry Men’. Together they lived in Sherwood Forest, Nottinghamshire, where much of the action in the early ballads takes place. Robin Hood was popularly depicted as a contemporary and supporter of King Richard the Lionheart in the late C12, with Robin driven to living as an outlaw during the misrule of Richard’s brother John (who owned Nottingham Castle), while Richard was away on the Third Crusade. Much the Miller’s Son, Little John and Will Scarlet appear in early tales, and Maid Marian and Friar Tuck later entered the legends through the May Day Games in the C15 or C16.

A popular legend tells how once the Sheriff of Nottingham, frustrated at his lack of success in capturing the outlaw Robin Hood, decided to set a trap. He announced he was to hold a shooting competition in Nottingham, with a golden arrow as the top prize. Robin knew the competition was a trap but was tempted to show off his archery skills, so he and his band of Merry Men attended disguised as farmers and beggars. With his dyed hair, beard and eye patch, Robin shot straight and true all day, splitting an opponent’s arrow with his last shot to hit the centre target spot-on, and the Sheriff presented the mysterious one-eyed archer with his prize. As Robin and his Merry Men returned to the forest victorious and unharmed, the Sheriff sat down to dinner, gloating that the infamous Robin Hood had been too cowardly to turn up. At that moment, an arrow came shooting through the castle window, and into the table in front of the Sheriff, with a note thanking him for the golden arrow and signed ‘Robin Hood’. The people of Nottinghamshire continue to have a special affinity with Robin Hood, claiming him as the symbol of the county. A British Army Territorial (reserves) battalion formed in Nottingham in 1859 was known as the Robin Hood Battalion through various reorganisations until the ‘Robin Hood’ name was abandoned in 1992.

The sculptural group of statues of Robin Hood and his Merry Men and complementary plaques were commissioned by a local industrialist Philip E F Clay at a cost of £5,000 to commemorate the visit of their royal highnesses the Princess Elizabeth and the Duke of Edinburgh in 1949 for Nottingham City’s quincentenary celebrations. The site for the three free-standing statues of Robin Hood and his Merry Men, on land over the infilled outer ditch of the medieval Castle, was chosen in November 1951 by Nottingham City Council for its medieval character and legendary association with Robin Hood. A dedication plaque and four pictorial plaques (depicting Robin Hood, Maid Marian and Friar Tuck with hounds fighting Guy of Gisborne’s men; King Richard the Lionheart joining the hands of Maid Marian and Robin Hood; Robin Hood and Little John fighting on a bridge; and Robin Hood shooting his last arrow) were attached to the outer bailey wall of the Castle (the wall is already listed at Grade I, and so the plaques were not included in the listing assessment of the free-standing sculptures). The sculptural group was unveiled on 24 July 1952 by the Duchess of Portland, Ivy Cavendish-Bentinck, of Welbeck in Nottinghamshire. Early-C20 Ordnance Survey (OS) maps show a drill hall on the site where the statues now stand (demolished in 1927), and the 1954 OS map shows the statues in a landscaped park.

The group of bronze statues and plaques were sculpted by James Arthur Woodford RA, OBE (1893-1976), a sculptor, painter and engraver, born in Nottingham, and son of a lace designer. Woodford attended Nottingham School of Art between 1908 and 1915 and then served in the First World War (1914-18) with the 11th Sherwood Foresters. After the war, Woodford continued his studies at Nottingham School of Art (1919 - 1920) and then at the Royal College of Art (1920 - 1921) funded by en ex-Serviceman's grant, after which time he was awarded the Prix de Rome in sculpture in 1922. On completion of his scholarship in 1925, Woodford embarked on a busy and successful career as an architectural and heraldic sculptor. Woodford is associated with a number of listed sculptures and sculpture adorning listed buildings including: the war memorial fountain at the British Medical Association House in London (1954, listed at Grade II*); and sculptures of allegories for the extension of the Ministry of Agriculture, Fisheries and Food Government Offices by C E Mee in 1951-2 (listed at Grade II*). In 1953 Woodford was commissioned to make ten six-foot high 'Queen's Beasts' in plaster to decorate the approach to Westminster Abbey for the coronation of Queen Elizabeth II, a project which won him particular renown. In recognition of a distinguished career Woodford received the Order of the British Empire in 1953.

The group of three stylised sculptures of Robin Hood and his Merry Men, unveiled in 1952, designed by James Arthur Woodford, is listed at Grade II for the following principal reasons:

Architectural interest:
* an imaginative sculptural depiction of the legendary figures of Robin Hood and his Merry Men, crafted of quality materials and with great skill;
* for the design of the sculptural group by James Arthur Woodford, a noted Nottingham sculptor, who also sculpted the fountain of the British Medical Association House (listed at Grade II*), and sculpture within numerous listed buildings, including the extension of the Ministry of Agriculture, Fisheries and Food Government Offices by C E Mee in 1951-2 (listed at Grade II*).

Historic interest:
* for the historic association of the legendary figures of Robin Hood and his Merry Men with Nottingham Castle;
* for the commissioning of the sculptural group to commemorate the visit of their royal highnesses the Princess Elizabeth and the Duke of Edinburgh in 1949 for the city’s quincentenary celebrations.