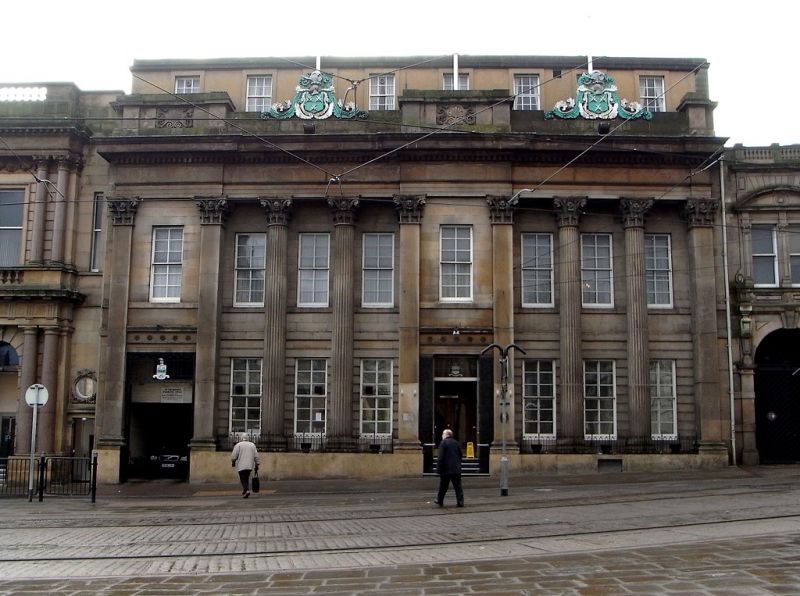 INTERIOR: panelled entrance hall with granite Tuscan columns and pilasters, and marble fireplace with reset stone coat of arms and monogram of Tobias Ellis, 1692. Large branching stone staircase, 1867, with cast-iron balustrade and ramped scrolled wooden handrail. Square stairwell has coved ceiling and round-arched wooden wall panels with keystones First floor banqueting hall, 1867, has panelled marble dado and on either side, paired marbled Corinthian columns. South end has five similar single columns. East side has three round-arched moulded recesses, the central one with a bow fronted panelled gallery with half-dome. North end has a marble panelled ladies' gallery with two pairs of double doors below it. Elaborate cornice and coved panelled ceiling, with semicircular windows at the head of each bay. 1832 banqueting hall has plaster panelled walls with paired Corinthian pilasters and enriched dentilled cornice. Coffered segmental vaulted glazed ceiling with central glazed saucer dome. South end has a concave fronted enriched gallery, with an elliptical arch carried on giant Corinthian columns. Below, on each side, a panelled double door. At the opposite end, a pair of double doors with corniced doorcases. Adjoining vestibule has similar segmental vaulted coffered ceiling. Front reception room has three windows in the centre flanked by single recessed windows with paired Ionic columns in antis. Marble fireplace with mantel mirror. Dentilled cornice and coved ceiling with guilloche band. Adjoining silver gallery has early C20 wooden panelling from an ocean liner, fitted display cases, recesses at each end flanked by single Egyptian columns, and coved glazed cross beam ceiling. Adjoining drawing room has three corniced doorcases and a larger doorway to the reception room. Two corniced marble fireplaces, and coved cross beam ceiling with Greek Key and moulded cornice. Ground floor Master Cutler's room has half-height wooden panelling and egg-and-dart cornice. Resited oak Renaissance Revival style fireplace with double columns and overmantel, dated 1623. On either side, single stained glass windows. Adjoining Mistress Cutler's room has plaster panelled walls and ceiling with cornice, Classical plaster fireplace and corniced doorcases. Hughes room, 1923, has wooden wall panels with keystones and cornices, framing windows and display cases. At each end, an elliptical arch, with at one end a fireplace with portrait above, and at the other end a doorcase, both flanked by Corinthian columns. Muniment room has Adam style frieze and panelled ceiling. Hadfield hall, at rear, has double arcades of Doric columns, panelled walls and moulded cornice. At one end, a bust of Sir Robert Hadfield, surrounded by a railing and flanked by smaller busts.

HISTORICAL NOTE: Cutlers’ Hall was a significant location in the local suffrage campaign. In March 1908 Christabel Pankhurst and Mary Gawthorpe, two leaders of the Women’s Social and Political Union (WSPU) spoke at an ‘At Home’ meeting in the Hall. Meetings like this one were typical of the Union’s large propaganda campaigns aimed at boosting the membership of local branches. In October 1908, when Home Secretary Reginald McKenna was the chief guest at the Annual Cutler’s Feast, suffragettes protested loudly outside the hall. When Winston Churchill attended the same event in October 1912 a large police presence kept the suffragettes away, and he was smuggled from the railway station in a luggage lift, and driven to the Hall where crowds of women harangued him. Although the police managed to keep protesters outside they interrupted the event by sending Churchill several telegrams during the dinner.