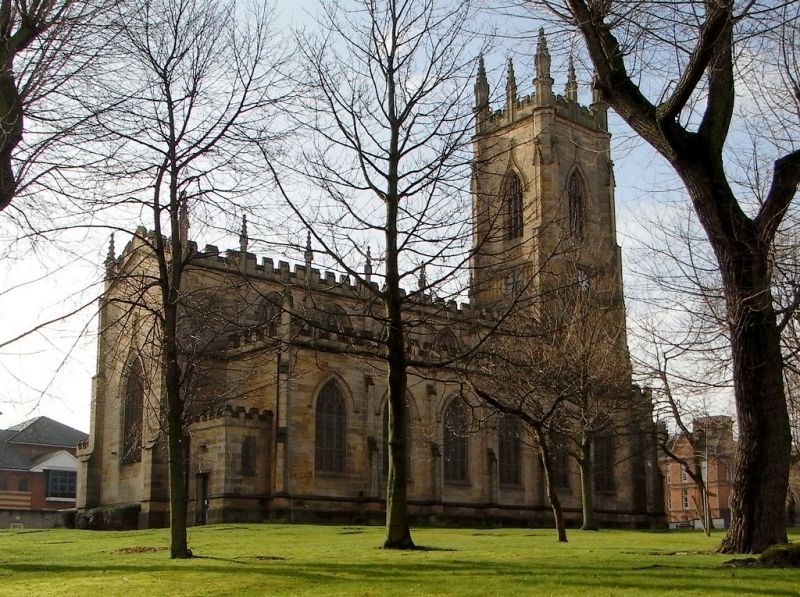 Church, now lecture theatre and student accommodation.
1821-25. By Hurst and Woodhead. Ashlar. Roofs not visible.
Perpendicular Revival style.
PLAN: sanctuary, north-east porches, nave with clerestory,
aisles, south porch, west tower, west porches. Pointed arch
window throughout.
EXTERIOR: plinth, buttresses, eaves band, crenellated parapets
and gables, crocketed pinnacles. Windows are lancets with
panel tracery and hoodmoulds.
Single bay sanctuary has to east a transomed 5-light window
with ogee hoodmould and finial. Blank returns with crenellated
single cell porches in the angles. These have a door to east
and a single light window to the return.
6 bay nave has thin wall shafts topped with pinnacles and six
3-light windows on each side to the clerestory. 6 bay aisles
have 3-light windows in each bay. South aisle has in the third
bay a gabled porch with moulded doorway and hoodmould, with
traceried panelled double door and overlight.
West tower, 3 stages, has angle buttresses with crocketed
gables, and multiple string courses. First stage has, to west,
a moulded doorway with ogee hoodmould and finial. Second stage
has a 3-light window. Bell stage has in the lower part a blind
arcade with a clock on 3 sides and a blank roundel to east.
Above, a 3-light transomed bell opening on each side.
Canted west porches, flanking the tower have moulded west
doorways with crocketed hoodmoulds and traceried panelled
double doors with overlights. North and south returns have
2-light windows.
INTERIOR: has flat panelled cross beam ceilings, that to nave
with thin wall shafts. Sanctuary has an arch with clustered
round shafts, set within a larger and more elaborately moulded
arch with diagonally set engaged piers. Above this, a Tudor
arched panel with traceried plasterwork in the spandrels. Nave
has 6 bay arcades with octagonal piers and moulded capitals
and arches with linked hoodmoulds. Clerestory sillband.
Blind-arcaded wooden gallery over the aisles and across the
west end, carried on clustered cast-iron posts. At the west
end, a central doorway and above, a moulded arch framing an
apsidal recess in the tower, set within a Tudor arched panel
with traceried plasterwork spandrels. Aisles have sloping
ceilings and traceried cast-iron brackets. At the east ends,
traceried wooden screens defining vestries. Central and side
entrances, to west, have traceried panelled doors, and the
central lobby has traceried panelled walls. On each side of
the tower, cantilevered stone winder staircases.
Fittings and floors mainly removed. Traceried wooden reredos
and octagonal marble and alabaster font remain. Stained glass
east window, C19. 2 wooden war memorial tablets, Decorated
style, c1920. Resited war memorial tablet from St Luke's
Church (qv), c1920. Other memorials mid and late C19.
(The Buildings of England: Pevsner N: Yorkshire: The West
Riding: London: 1967-: 451).