Church of the Nazarene and Adjoining Boundary Wall and Railing 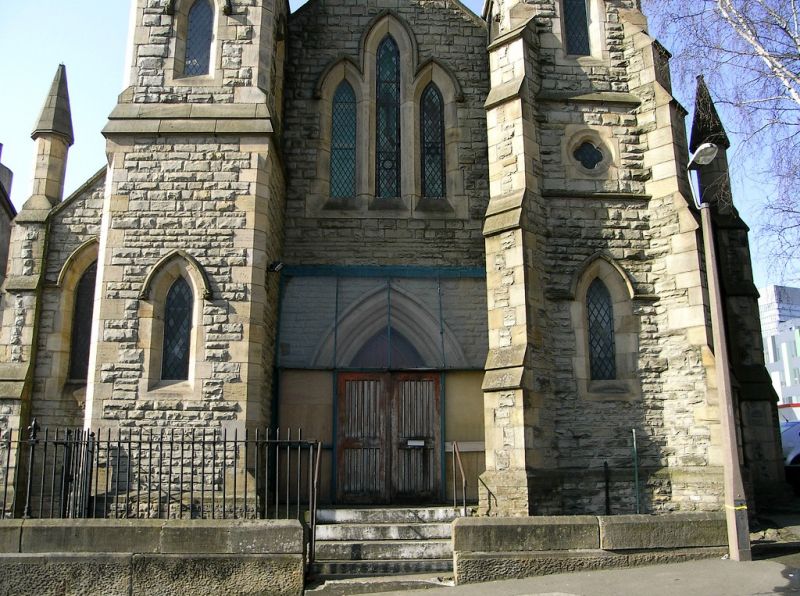 Entry Name: Church of the Nazarene and Adjoining Boundary Wall and Railing

Catholic Apostolic church, now Evangelical church. c1885, with
late C20 alterations. Rock-faced stone with ashlar dressings
and slate roof with side wall stack. Gothic Revival style.
PLAN: apsidal chancel, vestry, nave with aisles, 2 west
towers, one with spire.
EXTERIOR: plinth, quoins and coped west gable. Chancel has to
east staggered triple lancet. On each side, 2 smaller lancets.
Gabled vestry to north.
Buttressed nave has 4 lancets on each side. Projecting single
bay to north-west has angle buttresses, that to west with a
spire pinnacle, coped parapet, and a lancet with hoodmould.
West gable has a graduated triple lancet and below, double
chamfered doorway with double doors and hoodmould, under a
late C20 glazed canopy. To left, a square tower, 3 stages,
with string courses and crenellated parapet. Lower stage has a
lancet to west. Second stage has a lancet on 3 sides. Top
stage has a small lancet opening on each side. To its left, a
lancet. To right, square tower, 3 stages, topped with an
octagonal broach spire. Plinth, diagonal buttresses and string
courses. Lower stage has a lancet to west, second stage has a
quatrefoil window. Top stage has a lancet on each side.
INTERIOR has chamfered chancel arch with half-round responds,
flanked by a pointed arched door on each side. Chancel has
sillband and plaster vaulted ceiling with ribbed apse. Nave
has 4-bay arcades with octagonal and round columns and wooden
arches with traceried spandrels. Arch braced roof with
collars. 2 west bays enclosed by late C20 screen to form
mezzanine. Fittings include traceried wooden stalls, pews, and
desks with canopies, and octagonal wooden pulpit, all C19. No
stained glass or memorials.
SUBSIDIARY FEATURES: outside, at the west end, coursed squared
stone boundary wall with chamfered ashlar coping and
wrought-iron railing. Renewed central steps.