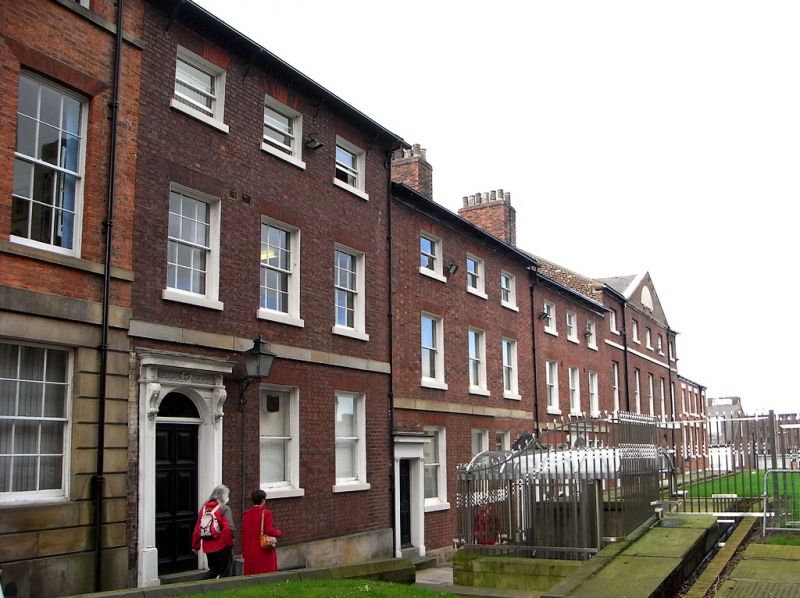 3 houses, now offices. Early C19, with mid C19 and late C20
alterations. Brick with ashlar dressings and slate roofs with
4 gable stacks.
All have plinths, string courses, and bracketed eaves, those
to left house dentilled. Each 3 storeys; 3 window range.
Windows have brick flat arches. Left house has three 12 pane
sashes and above, 3 smaller plain sashes. Below, 2 plain
sashes and to left, doorcase with panelled pilasters and
scroll brackets to small cornice. Fielded 6 panel door with
fanlight, and C19 lamp bracket. To right, 2 plain sashes.
Central house has 3 plain sashes on each floor, the upper ones
smaller and the ground floor ones irregularly spaced. To left,
a plain pilastered doorcase with cornice and 9-panel door. To
right, pedimented doorcase with moulded 6 panel door and
fanlight. Right house has 3 plain sashes and above, 3 smaller
plain sashes. Below, central segment-headed deeply recessed
doorcase with panelled surround and small cornice, with
6-panel door and overlight. To left, 2 segment-headed plain
sashes. To right, a paired plain sash.
INTERIOR not inspected.