Church of St Catherine with St Alban and St Paul 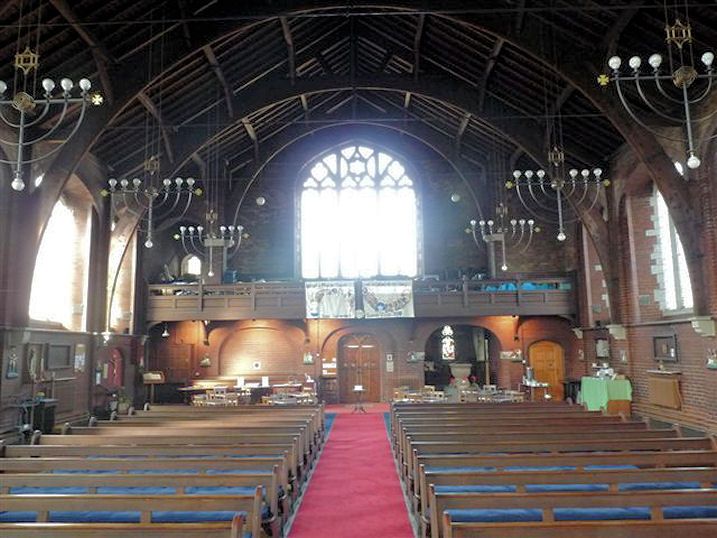 Anglican church. 1897. By Medland Taylor. Coursed yellow
sandstone rubble with red sandstone dressings and slate roofs
with red ridge tiles. Arts and Crafts style.
PLAN: nave at right-angles to street with a north-west tower
incorporating the porch, a south-west wing, an unusual
external south aisle (see below), and an apsidal chancel with
north organ house and south chapel.
EXTERIOR: the west facade is composed of a wide central gable
flanked by a small tower to the left and a set-back wing to
the right, with various sillbands stepped round. The tower, of
3 short stages, the upper ones slightly set back, has a
depressed arched doorway with chamfered surround and moulded
head, a shouldered lancet to the 2nd stage and a small 2-light
window above this, and a belfry with 2-light wooden louvred
openings protected by the oversailing eaves of a swept
pyramidal roof with a finial. The main gable has a ground
floor arcade of 3 chamfered arches with polychrome heads, the
1st 2 being windows of one and 2 lights respectively and the
3rd a deeply-splayed ogival-headed doorway with a moulded
surround and crockets in the head, each carved with a
different letter spelling "CATHERINE"; a very large 4-centred
arched west window with cusped lights and a hood-mould with an
ogival apex forming a pedestal to a statue in a niche; and 3
crosses at the apex.
The set-back 2-storey wing, with one small window on each
floor, an embattled parapet and a tall 2-light window in the
gable, is pierced at ground floor by a passage with
Tudor-arched doorways at each end. This leads through to an
arcade or external aisle formed by flying buttresses to the
south side of the nave. Both sides of the nave, which is of 5
bays and has conventional buttresses to the north side, have
tall windows alternately of 2 and 3 lancet lights. The chancel
has 4-light dormer windows on both sides of the 1st bay, that
on the north side gabled and that on the south side with a
hipped roof; the north chapel is canted, and the south chapel