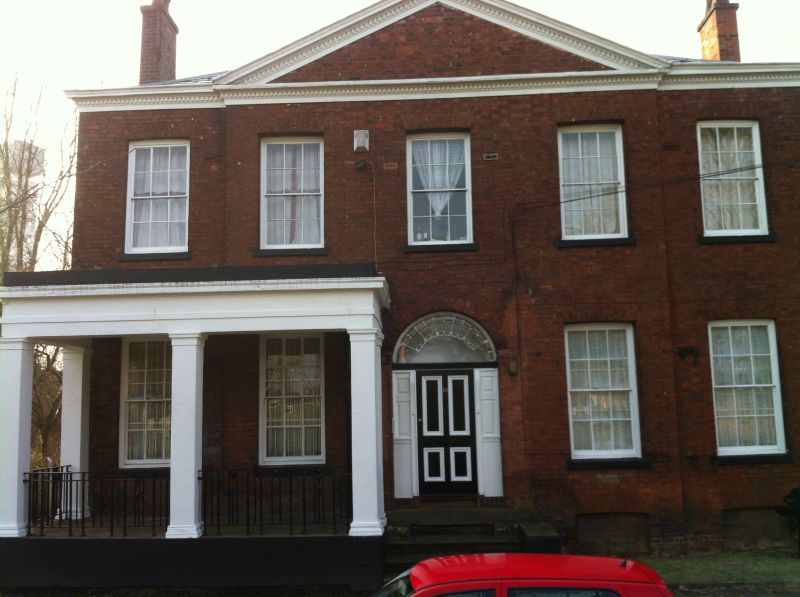 Officers' mess with some officers' quarters and
quartermaster's house to former Hulme Barracks; now flats.
1817; altered. Red brick, part rendered at rear, with
sandstone dressings and hipped slate roofs. Irregular
rectangular plan on north-west/south-east axis with main block
at south end and crosswing at north end. Georgian style. Two
storeys over basement, the main block 1:3:1 windows, with
pedimented centre breaking forwards, a 3-window link to the
right of this, and 1-window projecting wing, and a dentilled
cornice to the whole. The main block has a wide round-headed
doorway with panelled door and side panels and large fanlight
with radiating glazing bars, and sashed windows with raised
stone sills and flat-arched heads of gauged brick, those at
ground floor to the left of the doorway protected by an added
rectangular stone loggia composed of square pillars with
entablature, cornice and blocking course, with wrought-iron
railings. The linking range and wing to the north, enclosed by
a screen wall, has similar sashed windows. Left gable wall
rendered. The rear has a projection to the centre and northern
end of the main block, rendered and painted white, with a
2-storey segmental bow which has a pilastered 3-light sashed
window at ground floor (8, 12 and 8 panes) and one 12-pane
sash above; and the range to the north has 1:3 sashed windows
on each floor. Interior not inspected. History: cavalry
barracks until 1895, subsequently housed line regiments: men
stationed here included Prince Victor Albert, Prince Louis
Napoleon, the Prince Imperial, and Winston Churchill; and many
royal persons dined in the mess.