A Grade I Listed Building in Cromford, Derbyshire 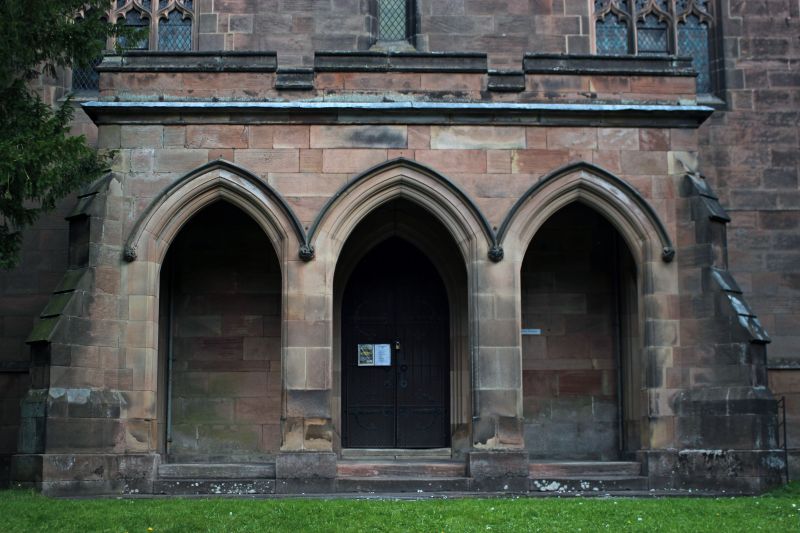 EXTERIOR: The church is in a lavish free Perpendicular style. It has embattled parapets on moulded cornices. The buttressed 5-bay nave has 2-light windows with transoms with hood moulds. On the south side is a tall stack above a boiler room. The unbuttressed west tower is 3 stages, with embattled parapet and corner pinnacles. It has a trefoil-headed west window in the second stage, above which is a clock dated 1859 in a lozenge panel, and 2-light belfry openings with louvres. It is flanked by lower bays housing the gallery stairs, which have plain parapets and straight-headed 3-light gallery windows with ogee-headed lights, and single-light side windows. The 3-bay open-fronted and open-sided narthex has diagonal buttresses, with arches under linked hoods, and with continuous ovolo mouldings. The chancel has 2-light windows in its polygonal sanctuary apse.

INTERIOR: The nave has a shallow-pitched roof with king and queen posts, supported by corbelled arched brackets enriched with tracery in the spandrels. The wide 2-centred chancel arch has an inner order on short corbelled shafts. The chancel roof has radiating ribs into the apse. In the west wall of the nave are 3 segmental-pointed arches, to the centrally placed organ and the galleries. The raked west gallery, an integral component of the design of the interior, has a Gothic arcaded front. The nave is paved in stone and the chancel has a mosaic floor, probably of 1897. Raised floorboards are beneath the pews.

PRINCIPAL FIXTURES: The most striking feature of the interior is its complete scheme of wall paintings, executed by A.O. Hemming (1843-1907). Decoration consists of a cream ground, foliage bands and vine scrolls in the window reveals, and stencilled patterning outlining the windows and arches. On the north side of the nave are Old Testament prophets and on the south side are the Evangelists. Either side of the chancel arch are Elijah with the chariot of fire to the left, Ascension to the right, with angels in the spandrels. Scenes from the childhood of Christ are depicted on the north and south chancel walls, with 2 images of Christ in the east wall. The reredos consists of shouldered panels painted with angels holding shields bearing Passion symbols, and a central panel of 2 angels holding a circle of cherubim. Chancel windows continue the theme of the life of Christ. A window in the north aisle is early C20 in the style of Kempe. The 1850s font has an octagonal bowl on a stem with marble shafts. The polygonal wooden pulpit has Gothic and linenfold panels. Benches have ends with arm rests and small quatrefoil panels. Richer choir stalls have blind-tracery panels to the frontals and the ends, which also have angel finials. The principal memorial is in the form of a 5-bay blind arcade in the chancel wall, of which 2 arches are under gables. Inscription panels commemorate Richard Arkwright (1732-92) and his descendants. In the nave are white-marble tablets to Martha Arkwright (d 1820) by Francis Chantrey, and to Charles Arkwright (d 1850) by H. Weekes.

HISTORY: The church was begun in 1792 for Richard Arkwright¿s industrial complex and residence at Cromford, and was prominently sited next to the cotton mill and River Derwent. It was designed by Thomas Gardner (c1737-1804), architect and builder of Uttoxeter, who was also employed on the reconstruction of Arkwright¿s Willersley Castle. The wide proportions of the nave are characteristic of the period, and Gardner's church probably had a small chancel of the kind that had become deeply unfashionable by the 1850s. The church was substantially rebuilt in 1858 by H.I. Stevens (1806-73), architect of Derby who built many churches in the East Midlands. Stevens enlarged the chancel, remodelled windows and added the tower and west narthex. The ambitious scheme of wall paintings and stained glass was undertaken by Alfred Octavius Hemming (d 1907), who had previously worked for Clayton & Bell and had completed a similar extensive mural scheme at Folkestone, Kent. The scheme at Cromford was completed in 1897 on the centenary of the church. The paintings were restored in 2002 by the Wallpaintings Workshop of Faversham. The church was re-roofed in 1996.

The Church of St Mary, Mill Road, Cromford, is designated at Grade I for the following principal reasons:

* The church is outstanding as part of the group of buildings associated with Richard Arkwright's first cotton mill at Cromford, which stands close by, and which forms part of a World Heritage site
* The church is associated with various members of the Arkwright family in the C18 and C19, and possesses good monuments to the family
* It has a very rare and complete scheme of wall paintings of the late C19, executed by Hemming, integrated with stained glass into a very unusual overall scheme