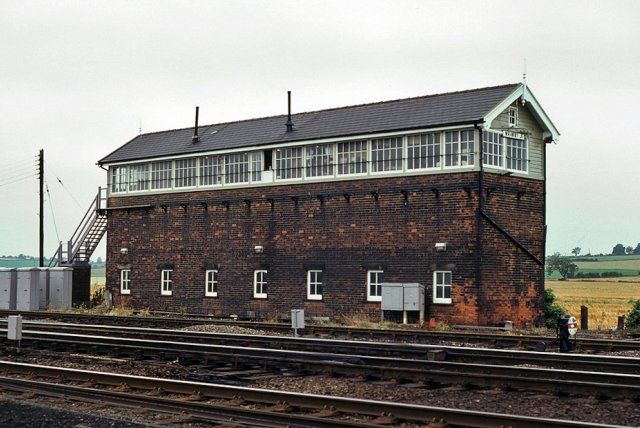 Signal Box. 1916. Built for the Great Central Railway. Red brick and timber, with a Welsh
slate roof. Tall ground floor section of brick with seven plain sashes on the south-east front,
and a single door to the south-west. This same front has a 2 flight timber staircase with half
landing supported on a square brick pier, this stair leads to a cantilevered balcony and
entrance door. The timber upper floor has a continuous strip of 13 windows with glazing
bars to the rail side and 5 windows to the rear, the ends have 2 windows each, with a small
window above and barge boards to the gables. This box was opened on May 7th 1916,
when it was the largest box on the Great Central Railway, it originally had 132 levers on a
single GC 41/2" front catch handle frame, 5 extra levers were added
later.