A Grade I Listed Building in North Hill, Cornwall 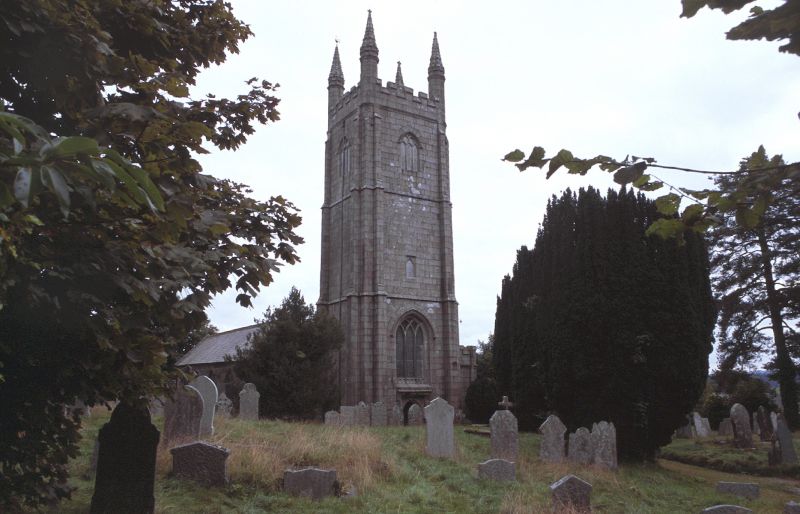 NORTH HILL
SX 27 NE
4/135 Church of St Torney
22.11.60
GV I
Parish church dedicated to St Torney. Norman font, early C14 details in chancel, the
remainder of the church largely late C15 or early C16. Restored in 1868.
Chancel of stone rubble. Ashlar granite north aisle and fine regular granite ashlar
blocks to south aisle, south porch with chamber above and west tower.
Plan: Nave and chancel, 4-bay north and south aisles, south porch, west tower and
vestry. The chancel has early C14 origins (or possibly earlier). The nave, north
and south aisles, south porch and west tower are probably late C15 or early C16.
Exterior: Impressive church with fine quality detailing, the south aisle, south
porch and west tower possibly by the same masons as those at the Church of St
Anietus, St Neot (qv). West tower of 3 stages with set back corner buttresses,
battlemented parapets and crocketted finials. 2-centred hollow chamfered arch and
west door with carved spandrels. 3-light west window, the intersecting tracery
probably late C18 but with an unusual band of carved roundels near the sill.
Perpendicular belfry lights. Much of the tracery in the north and south aisles has
been partly replaced in the C18 and C19. The south aisle has buttresses with set
offs terminating in crocketted finials and the interior of the impressive 2-storey
porch (qv St Anietus, St Neot) has a granite vaulted roof above the ground floor.
Sundial dated 1753.
Interior: Plaster removed from walls. Tall lofty 4-centred tower arch with type A
(Pevsner) moulded engaged piers. High quality well carved late C15 waggon roofs to
nave and north and south aisles. Chancel roof restored in 1868 when it was decorated
and painted. 4-bay tall lofty north and south aisles with type A (Pevsner) moulded
piers, moulded arches and carved and moulded capitals. The pews were replaced in
1896 but the bench ends are well carved and detailed using a C16 pattern: C19 pulpit
and lecturn. Painted Royal Coat of Arms of Charles I. Entrances to rood loft
stairs. Norman font with simple round bowl and shaft with granite base. The chancel
was restored in 1868 when much of the fine quality C14 work was discovered. There
are two C14 ogee niches on either side of the east window, a piscina and credence, a
sedilia in the south wall, which, though much restored has pillars of polished
serpentine and a tomb or Easter Sepulchre in the north wall with an elaborate C14
ogee arch. Squint between Trebartha pew and chancel.
The Trebartha pew at the east end of the south aisle has marquetry panels dated 1724
which have been reset in later panelling. Fine memorials including coloured slate
ledger stone of Richard Spoure (1653) and elaborate aedicular monument to Henry
Spoure (1668). Mausoleum of Rodd family under east end of north aisle. At west end
of north aisle fine slate table tomb of Thomas Vincent of Battens (qv) and Jane his
wife (1606).
A Tourist's Guide to the Parish Church of St Torney 1985.
Pevsner, N and Radcliffe E The Buildings of England, Cornwall 2nd edition 1970.
Polsue, J. Lake's Parochial History of the County of Cornwall, 1872.