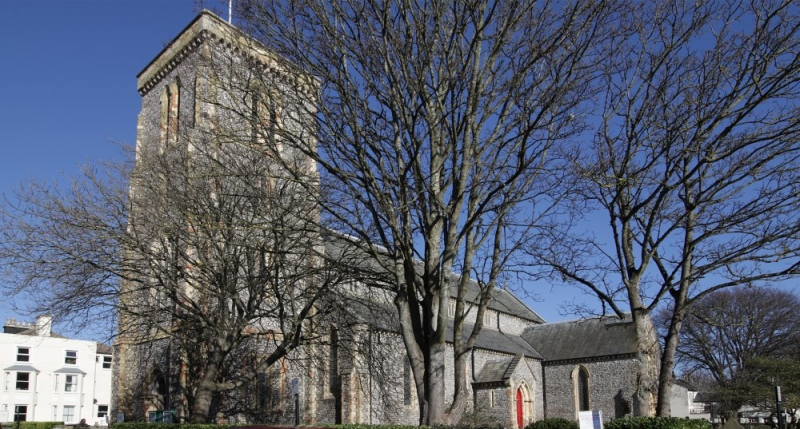 Town church, built in the centre of a square. 1840-43 to the designs of John Elliott of Chichester in lancet style, cost about 4,500 pounds the original design amended following criticism from the Camden Society. Chancel remodelled and refurbished in 1894. Flint with densely-packed galetting of flint flakes; some of the dressings are Caen stone but Ellerary notes that the quoins are experimental artificial stone (24); brick dressings to the 1894 phase; slate roofs. Elleray notes that the inner tower walls are brick and the upper two stages braced with timber (29). West tower, clerestoried nave; lean-to N and S aisles, N and S transepts; chancel with N organ chamber and S vestries.

4-stage tower with a freestone parapet above a corbelled cornice and angle buttresses which become diagonal on the upper two stages. Lancet windows except for a Decorated style traceried W window. Steps up to the W doorway which has a double chamfered arch. The tower was underpinned in 1907-8 under the supervision of Mr R Singer Hyde. The lean-to aisles are tall and narrow with angle buttresses and double chamfered lancet windows with hoodmoulds. Small paired lancet clerestory windows in square-headed frames. The transepts have large lancets in their W walls and stepped triple lancets in the N and S walls above doorways. The chancel has a 3-light Decorated style traceried E window. The 1894 vestries and organ chamber are built in a style to match the original but have yellow brick dressings to the openings. On the S side there is a polygonal vestry porch with a steep pyramidal roof and the earlier C19 vestry exists behind later additions.

INTERIOR. Unusually tall, slender, octagonal Caen stone arcade piers with vertical recessed roll mouldings at the corners of each octagon; moulded capitals and double chamfered arches. Pitch pine tie beam, king post and strut roof to the nave with arched braces carried on short posts on moulded corbels; cusped detail. The transept roofs are similar. The aisle roofs are essentially one half of the same design. Moulded 1894 chancel arch on short shafts with moulded capitals. The chancel roof has 3 hammerbeam trusses with cusped decoration. The transepts have 1865 galleries, the N gallery with raked seats, the S gallery used as the organ chamber since 1971. 3-light 1894 internal W window with reticulated style tracery, inserted when the W gallery was removed. Full set of nave benches with poppyhead finials, a rarity. The 1894 chancel has a mosaic reredos with a frieze of mosaic foliage and text. The mosaic extends across the whole of the E wall and returns to N and S as a dado; mosaic sanctuary floor. 1894 choir stalls with open traceried frontals; encaustic tiles to the chancel floor. 1894 polygonal stone pulpit by Jones and Willis of London. The pulpit is on a stone stem with carved stiff-leaf cornices, the sides decorated with blind tracery and marble shafts. Font with a small octagonal bowl decorated with blind quatrefoils on a thick stem with trefoil-headed panels. 1892 organ by J J Binns of Leeds introduced in 1970. Oak panelling in tower porch of 1929. W window by Bell of Bristol, 1850. 'Cathedral' glass of 1894 in internal W window and aisles. Several C19 and later wall tablets and brasses.

Although it was sited in what was a fashionable part of Worthing, this finely detailed church was erected specifically for the accommodation of the poorer classes and within an evangelical tradition. It is the first Gothic Revival church built in the town.

Christ Church is an exemplary ambitious pre-archaeological Gothic style C19 church, preserving its original slender roofs and arcades and a full set of benches with poppyhead finials in the nave.