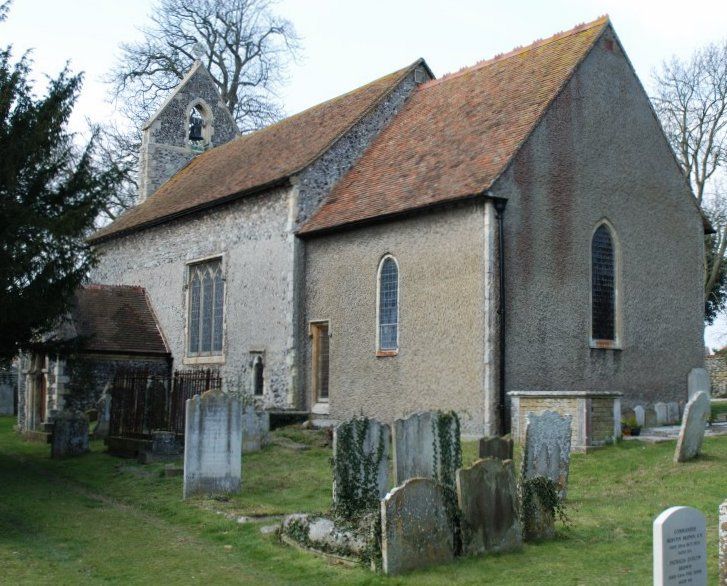 EXTERIOR: Bellcote to W end. Late C19 Norman style doorway to S porch. C12 S door has chevron, billet and nailhead moulded arch carried on heavy shafts with scallop capitals. Most windows altered or renewed. S side of nave has one small Norman window to W of porch, and a large, late-medieval three-light window to E with label mould and head-stop, tracery renewed. To N end of the nave wall is a C14 low side window, trefoil-headed with a label mould.

INTERIOR: C12 chancel arch, of considerable scale for a small church, has chevron and nailhead mouldings, with the abacus moulding continuing along the wall on each side. Traces of medieval wall painting above the arch on the nave side. C14 trefoil-headed piscina at N end of S wall of nave, below low side window with which it is possibly contemporary. Two niches in chancel wall, one an aumbry, the other a credence. King-post roof is late C19. Numerous monuments, principally early-mid C19 neo-Classical wall tablets, several to naval or military figures. Six hatchments include that of the Duke of Wellington, Lord Warden of the Cinque Ports from 1829-52, which was carried in front of his cortege to the station after his death at Walmer Castle, bearing the motto: 'Virtutis fortuna comes'. Cone font cover of 1664.

HISTORY: Built c1120 by the d'Auberville family, probably as the chapel to their manor house, Walmer Court, the ruins of which stand about 15m to the NE of the church and are a scheduled ancient monument. The southern wall of the manor house forms part of the churchyard wall. The church was enlarged, rather unconventionally, by the addition of a galleried nave on the N side of the existing nave, thus reorientating the church on a N-S axis and placing the altar at the S. This probably dated from the late C17, judging from a drawing of 1826 of the church as existing by George Ansell, who enlarged the extension at that time. The extension was demolished in 1898, the church conventionally reorientated, and the nave N wall reinstated. The Duke of Wellington was a regular worshipper at the church when in residence at Walmer Castle. St Mary's ceased to be the parish church when the new Church of St Mary was built in 1887-8.

SUMMARY OF IMPORTANCE: Of more than special interest as a church with significant C12 and later medieval features. It has a strong visual and historical relationship with the ruins of the moated manor house of Walmer Court, a scheduled ancient monument, and historic interest for association with the Duke of Wellington in his role as Lord Warden of the Cinque Ports, whose hatchment hangs on the nave wall.