Church of the Sacred Heart 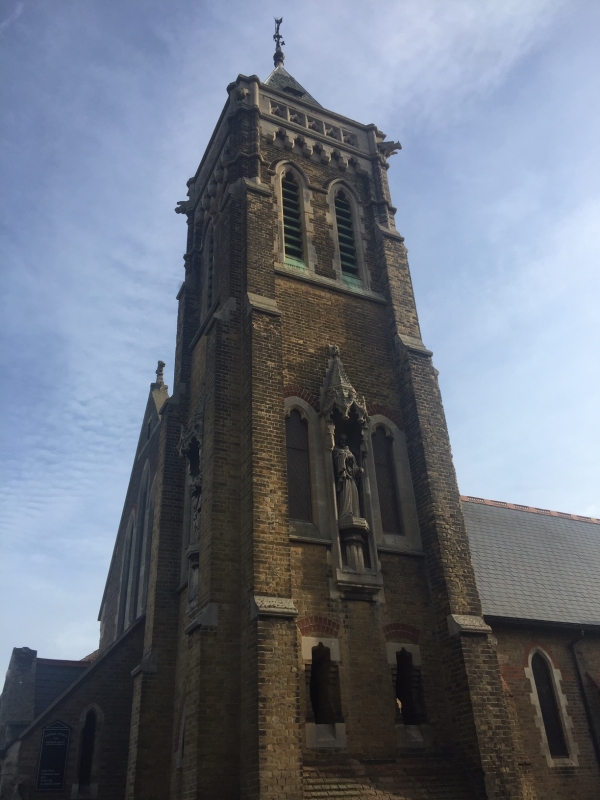 Roman Catholic church, remaining part of a convent. Designed in 1881 in Gothic style by Peter Paul Pugin and Cuthbert Pugin and foundation stone laid in that year but not completed until 1890 and tower not until 1897. This is the only remaining part of the Convent of the Visitation, built by an order of nuns founded in France in 1610, of which the remaining buildings were demolished in 1982.
EXTERIOR: Built of stock brick with stone dressings and slate roof. Comprises vestibule higher than the rest of the church, three bay nave and three bay chancel in one range, south transept, south west tower and west porch. West front has a gable with stone coping, cross-shaped saddlestone and kneelers. Triple lancet window. Brick porch with large arch with dripmould, double doors and steps to street. Tower in three stages with slate pyramidal roof with metal cross-shaped finial. Stone fretted balustrading with gargoyle waterspouts and machicolations. Top or bell stage has two trefoil openings with wooden louvres. Central stage has stone niche with crocket and statue of the Virgin with Child flanked by trefoil lancets. Buttresses. Through archway to lowest stage. South side has three lancets separated by buttresses and a gabled transept with kneelers and rose window. North side has two lancets and the nuns choir was originally attached here. East front has gable with cross-shaped saddlestone and kneelers and triple lancet window with trefoil heads, the centre taller .
INTERIOR: Bell tower has bell of 1757 made by Chris. Aug. Becker in Hildesheim in 1757. Vestibule has wooden roof and screen with three lancets. Nave has arch-braced roof supported on stone corbels and five stained glass windows depicting the Good Shepherd, Queen conceived without sin, St Michael and the Two Labourers in the Vineyard, Tobias and the Angel and an unknown bishop saint. Seven rows of pews survive and origiinal tiled floor. South window has rose window with four Christ in Majesty together with St Francis de Sales and St Jane Frances de Chantal, founder and Foundress of the Order of the Visitation. Original altar with four marble colonnettes and three panels depicting Sacred Heart flanked by Angels, carved stone reredos with six trefoil-headed marble panels and marble feature with brass cupboard containing the Host with elaborate octagonal canopy with marble columns and stone gables with angels rising from the bases.
HISTORY: Only remaining part of the convent of the Order of the Visitation of Holy Mary. Originally founded in France in 1610 a Polish branch were expelled in 1865, first to Germany and then Walmer in 1875 where they bought a house called Roselands and gradually built a convent and chapel. All the other convent buildings were demolished in 1982.