Church of St Michael and Our Lady (Wragby Parish Church)

A Grade I Listed Building in Huntwick with Foulby and Nostell, Wakefield 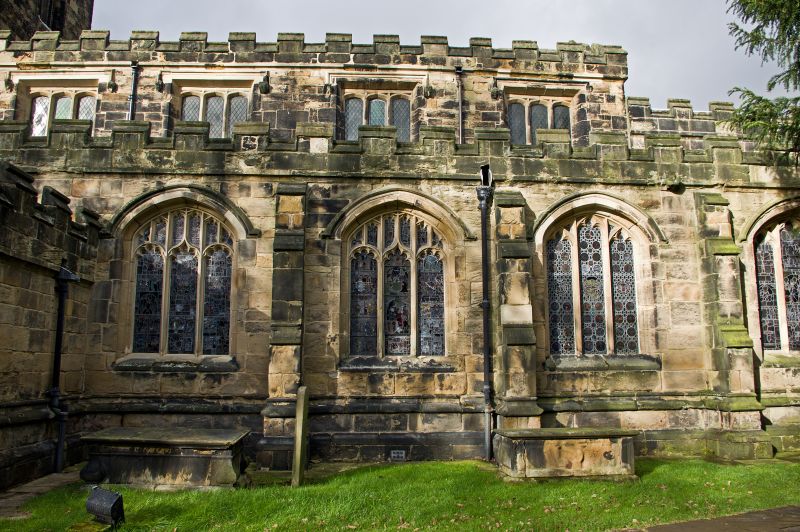 Church. Dated 1533 in chancel; restored. Coursed squared sandstone, stone
slate roof. West tower, nave and chancel with continuous north and south
aisles. Perpendicular style. The unbuttressed tower has a chamfered plinth,
a 2-centred arched west doorway with 2 orders of hollow moulding, and a
hoodmould, a 3-light west window with Perpendicular tracery and a hoodmould,
and above this a niche with cusped ogee head and a finial flanked 2 carved
wheel patterns on each side, a dripmould to the belfry stage, 2-light louvred
belfry windows with Perpendicular tracery and hoodmoulds, and an embattled
parapet with crocketed corner pinnacles. The 4-bay nave has a clerestorey
of 4 deeply-recessed square-headed windows each of 3 arched lights with
hollow spandrels and hoodmoulds. The aisles are buttressed and have deeply-
recessed windows, all of 3 cusped lights with Perpendicular tracery, with
hollow-moulded reveals and hoodmoulds; and embattled parapets; there is a
gabled porch to the 1st bay of the south aisle, with 2-centred arched outer
doorway moulded in 2 orders, and hoodmould with figured stops, a dripmould
following the gable and carried round, and a high embattled parapet with a
sundial mounted in the apex over the doorway. The chancel has a large
transomed east window with cusped lights and Perpendicular tracery.
Interior: nave and chancel arcades of double-chamfered 2-centred arches on
octagonal columns with moulded caps; kingpost roof to nave; coffered ceiling
to chancel, with moulded beams and carved bosses; Latin inscription on
wallplate in chancel commemorating Prior Alured (Comyn - penultimate prior of
the Augustinian Priory of St Oswald) "who caused this choir to be built the
ninth year of his Priorate and in the year of Our Lord 1533;" cylindrical
Norman font with large zig-zag decoration (brought from Auburn near
Bridlington in 1830); Flemish carved reredos; wall monument to Sir Rowland
Winn (4th baronet), by Flaxman, 1806. Pulpit with C17 Venetian carved panels
in Turkish boxwood, and sounding board; hatchments of Winn family (in
chancel) and Arms of Charles II (above door); Cl8 organ case.