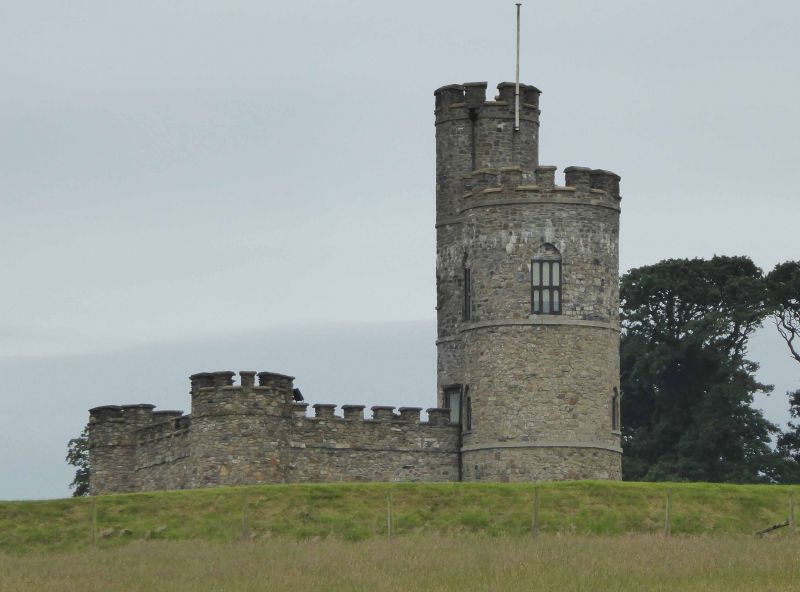 Folly, built in form of look-out tower. Probably late C18. Stone rubble with stone
dressings. Lead roofing removed in late 1940s. Tall round tower with smaller
circular stair turret, which rises slightly above the tower, adjoining to west.
Stair turret and tower both of 3 stages demarcated by unmoulded stone strings.
Embattled parapet partly surviving to stair turret. The tower has Gothick pointed
arched window openings to each stage on south and north sides. On south side the
larger opening to the top stage has transomed timber mullion windows of 3 segmental
arched lights, the middle stage window has been removed and the bottom opening
infilled. On the north side the first and second stage windows are blocked, the top
stage window opening set slightly to the right over a blocked ground floor doorway
with timber lintel and brick relieving arch. Entrance to east side with cambered
lintel and plank door. Pointed arched window opening above to third stage with
transomed timber mullion windows of 3 segmental-arched lights.
Stair turret has narrow single light window openings to south side with segmental
arched timber lights to the upper 2 stages, the bottom stage window blocked.
Pointed arched window openings to each stage on west side, the 2 light transomed
mullion windows boarded over.