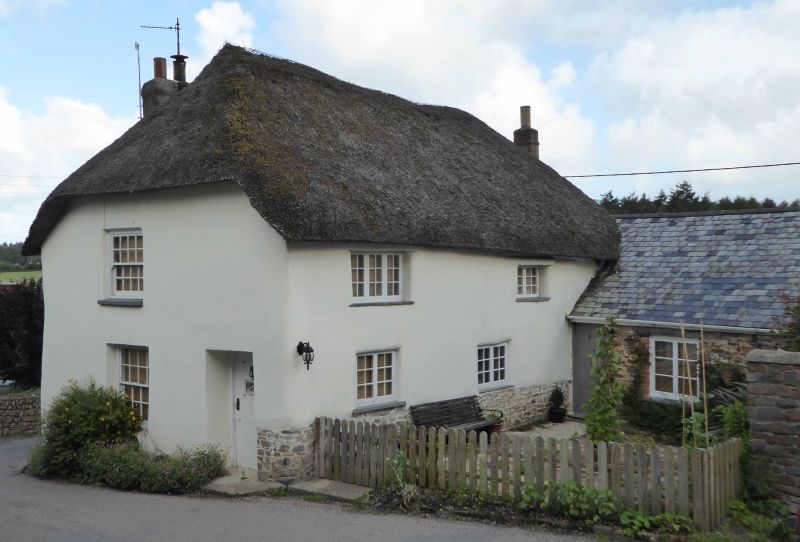 Cottage. C18 but possibly earlier fabric concealed, extended in late C19. Rendered
stone rubble and cob. Thatch roof, half hipped to front end, gable end to rear.
Slate roof to late C19 kitchen range. Lateral stack to left side with offsets and
rendered shaft. Stack with bread oven projection at rear gable end.
Built gable end to the street, with 3 rooms in line, a narrow entrance hall passage
now partitioned, running from entry at front right side through to the third room at
the rear which formerly was the kitchen and which has a separate entrance from the
left side. The front room is heated by the lateral stack, the staircase entering
this room at the rear and dividing the smaller middle room from the entrance hall
passage. In the late C19 a single storey gable-ended kitchen range was added to the
rear right side forming an overall L-shaped plan.
2 storeys, single storey late C19 kitchen range. 2 window range to left side. C19
two light casements, 6 panes per light above two 2 light casements 3 panes per light
flanking plank door with deep reveal. C20 sash window at front end over 16 paned
hornless sash to left of C20 door. 2 light casement to upper storey right side with
original leaded lights and similar casement to rear gable end, the left hand light
replaced.
Interior: some old plank doors survive mostly with H-L hinges. A single C18 turned
baluster to balustrade at head of stairs. No access to roofspace, but the feet of 3
trusses with straight principals suggest the C18 roof structure is intact.