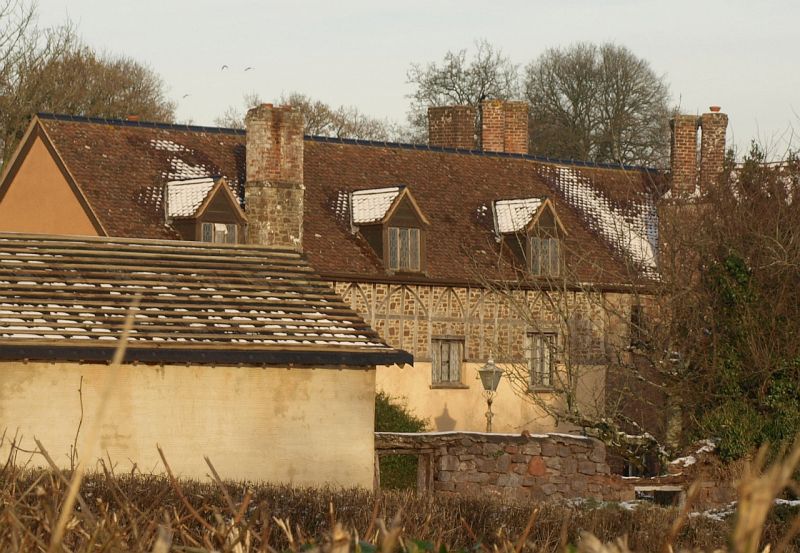 Church of England Parish: Cadbury St Michael and All Angels

House, formerly vicarage. C17 origins, thoroughly remodelled and extended in circa
1830, C20 renovations. Whitewashed and rendered to the level of the first floor
windows on the front elevation, above that the construction is C19 timber framing
with local stone infill ; right crosswing C19 stone rubble with dressed quoins and
stone dressings ; ornamental tiled roof, gabled at left end and ends of wing ; front
lateral projecting stone stacks, lateral stack in front right corner between wing and
main range, 2 rear lateral stacks.
Plan and Development. The precise plan of the pre C19 house has largely disappeared
as a result of the 1830s remodelling, although there is some evidence that the
present main range, on a west-east axis, contains the core of a single depth cross or
through passage plan at the west, and there is evidence of a pre C19 rear left
outshut. The present plan consists of a main range, with 2 rooms at the left (west)
end, an entrance into the C19 stair hall to the right and a 2 room plan C18 crosswing
at the right end. The 1830s remodelling in a free Elizabethan style involved the
addition of an attic storey and a narrow rear service block absorbing the earlier
rear left outshut. There are some oddities to the plan: the 2 left hand rooms are
divided by a narrow passage, blocked at front and rear, and there is no fireplace to
the front lateral stack. The early core of the house, at the left end, is the
service end of the house and probably has been since the C19.
Exterior 2 storeys and attic. Asymmetrical picturesque 4 window front plus 1 window
crosswing at the right ends ; pierced bargeboards to the crosswing gable.
Front door on front at right, adjacent to the crosswing in a chamfered Tudor arched
doorway, projecting stone stack with stack in angle between main range and crosswing
with paired diagonally-set brick shafts. 3 gabled roof dormers with 3-light
casements with glazing bars ; the remaining fenestration in the main range is of
various designs including one 16-pane sash and
casement windows with glazing bars, 2 modern casements to left of lateral stack.
The 2 windows in the crosswing are C19 mullioned and transomed.
Interior The 2 left hand rooms have corner fireplaces, the left hand room fireplace
has ovolo-moulded jambs of volcanic stone.
A deeply-chamfered crossbeam has no stops and replaced joists
and may be re-sited. The room next east has a roughly chamfered
crossbeam. The early C19 right end of the house has a stick baluster stair with a
ramped handrail and turned newel post : the 2 rooms in the crosswing both have good
Gothic plaster cornices, co-eval chimneypieces to the front room, replaced
chimneypiece to rear room. Some of the first floor rooms have plain C19
chimneypieces, 1 with good Gothic iron grate ; surviving C18 joinery suggests a
Georgian phase of refurbishment.
An unusual house with an attractive use of materials.