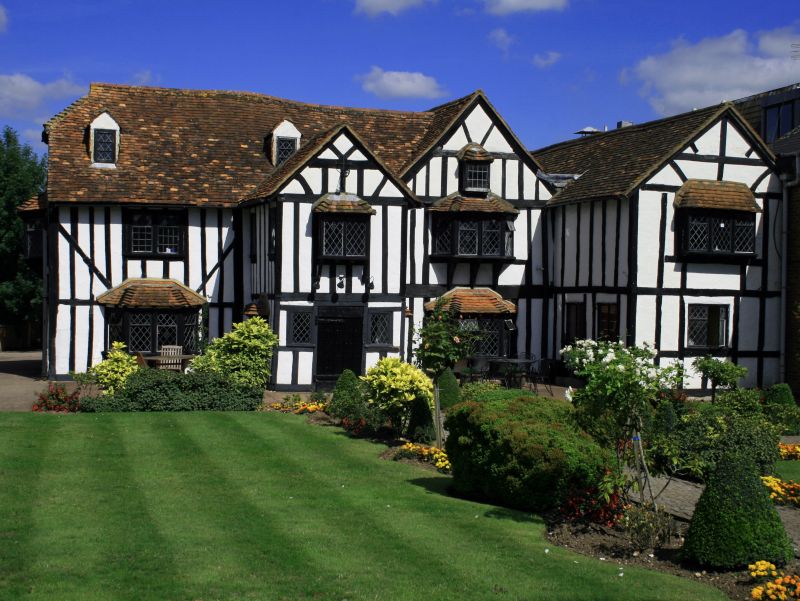 The description should be amended to read:

House, now hotel restaurant. Restored timber framed house of C15 origin,
with adjoining lobby entry wing of late C16 or C17; later converted to
cottages; knocked into one, remodelled and extended in 1936-37; SE wing of
1937 further extended after 1968. Front elevation formerly tile-hung above
and of brick below, with tile hanging continuing into NW return. Since 1937, timber framed and plastered, incorporating studs added in 1937. Plain tile
roof with half-hipped NW end and gable to C15 cross-wing and to SE. post
1968 wing. Two storey gable ended porch wing in centre, in front of former
lobby entry; oak studded door. On ground floor, two modern oriel bay windows
with hipped tile roof, one also on first floor in C15 wing, in porch wing
and at first floor in NW return. Various lead panel casements of 1936-37.
Two small tiled dormers of 1936-37. The C15 wing may originally have been jettied, and it retains a moulded truss at first floor. The whole building
has been very much restored but is still substantially an old structure.
Large, later C20 additions to rear, facing car park. See pre-ferbishment
photo in Gordon Anckorn, A Sevenoaks Camera, 1979.