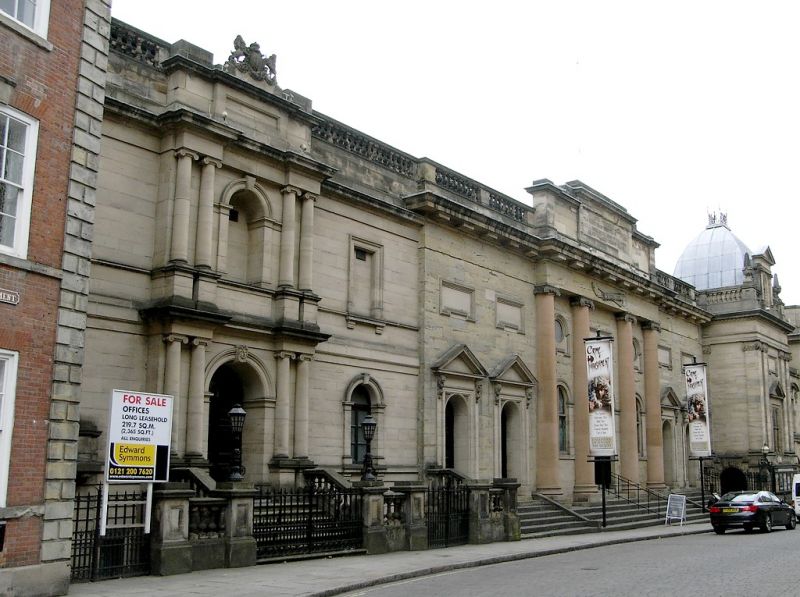 Shire hall and adjoining county gaol, now disused, with
attached steps and railings. Designed 1769-70 by James Gandon
and built 1770-72 by Joseph Pickford of Derby. Eastern
addition 1875-76 by W Bliss Sanders. Remodelled and extended
to west 1876-79 by TC Hine, following a fire.
Beneath, and at the rear, extensive rock-hewn caves and cells,
C18 and earlier, and various C19 brick additions, including
retaining walls to the cliff. Ashlar, with ashlar dressings
and slate roofs with skylights. Neo-Classical style with
additions in Italian Renaissance style.
EXTERIOR: largely original central block has a deep
dentillated cornice and pierced balustrade. 2 storeys; 7
window range. Projecting centre, 3 bays, divided by giant
Ionic half-columns. Central round-arched doorway with keystone
and panelled double doors, flanked by C19 round-arched cross
casements. Above, a rectangular blank panel flanked by
roundels, all with moulded surrounds. The frieze is decorated
with Roman symbols of justice, and above the cornice is a
panelled parapet containing an inscribed datestone. Beyond, on
each side, 2 round-arched doorways with pediments on brackets,
panelled doors and fanlights. Above, 2 rectangular blank
panels. In front, 3 parallel flights of steps.
To left, addition, 1875-76, with rusticated basement, sill
bands, string course, moulded cornice and pierced balustrade.
2 storeys plus basement; 3 window range. Projecting central
entrance bay flanked on each floor by paired Ionic columns and
topped with a panelled parapet and the City coat of arms.
Round-arched doorway with keystone, with panelled double doors
and fanlight. On either side, a round-arched window, the left
one fronted by a balustraded balcony. Under the windows,
round-arched doorways with mask keystones. Above, 3 blanks
with moulded surrounds, the central one round-arched.
In front, steps up to the central door flanked by short ashlar
balustrades with panelled piers, 2 of them topped with
cast-iron lamps. Beyond, steps down to the basement, with
pairs of wrought-iron gates.
To right, a projecting stair turret, 1876, topped with a
square lead dome and cast-iron crest. Rusticated basement,
paired Ionic angle pilasters, dentillated cornice, pierced
balustrade. On each side, a round-arched cross mullioned
window under a pediment, and above it, a blank panel. Above
again, a pedimented dormer with a round-arched cross casement.
To left, an entrance with wrought-iron gate and overthrow.
INTERIOR has a central entrance hall, 2 storeys, with
round-arched arcades on 3 sides, with round columns and
waterleaf capitals. To east, County Court, refitted 1876, with
raised public galleries on 3 sides, with 2 pairs of Ionic
columns in antis between square Ionic piers. Complete wooden
fittings of 1876, including dock, jury box, judge's throne,
and seating for court officials. To west, Civil Court, 1876, 2
storeys, with raised octagonal round-arched arcade with marble
columns. Complete original fittings including brass gas lamps.
Coffered ceiling with central skylight.
(The Buildings of England: Pevsner N: Nottinghamshire: London:
1979-: 225; Get to know Nottingham: Brand K: The Shire Hall
and old County Gaol: Nottingham).