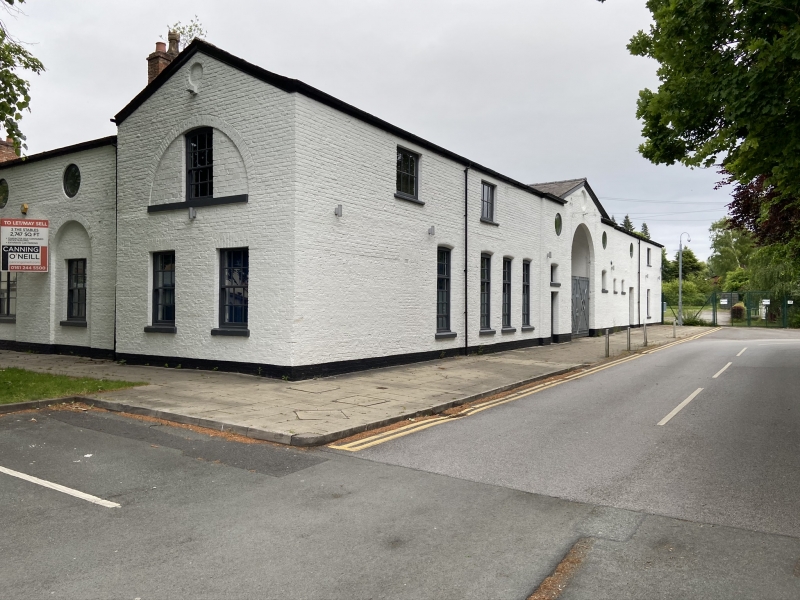 Coach house and stable block, with attached yard wall, now
Rural Studies Centre. Late C18 or early C19, altered. Red
brick in English garden wall bond, the outward facing walls
painted white; slate roofs. L-plan formed by double-pile main
block facing west with receding wing on south side. Two
storeys, symmetrical west front with 3-bay main range flanked
by gabled wings breaking forwards; the main range has 3 blank
arches, the centre with a multi-pane glazed screen and the
outer containing 12-pane sashed windows, and a blocked
pitching hole over each, the wings have two 12-pane sashes at
ground floor and a semi-circular blank arch at 1st floor
containing a segmental-headed 12-pane sash. Chimneys at the
junctions. The left return of the left wing (former ostler's
cottage) has a blank arch at 1st floor, a segmental-headed
12-pane sash in this and an added porch below, a
segmental-headed 16-pane sash on each floor to the left, 3
blocked round-headed windows at ground floor and a blocked
segmental-headed window above these. The long south wing has a
giant round-headed archway in the centre, under a simple open
pediment with a blind oculus flanked by groups of 3 pigeon
holes, altered or inserted tall windows in the former stable
to the left, small segmental-headed windows to the right and a
doorway with a blind oculus over. The courtyard side of this
range has an arcade of 4 shallow elliptical arches on
sandstone columns, filled in except that at the left end which
has a sliding door, and that in the centre which has a stable
door; a 6-pane fixed window over the first and blocked
pitching holes over the others; and to the right of the
entrance archway, an elliptical arch now filled in and
containing a window. The rear of the main range has mostly
altered openings. North and east sides of yard enclosed by
brick screen wall approx. 3 metres high. Interior: roof of
rear portion of main range has 2 oak king-post trusses with
raked struts and curved principals, and re-used oak purlins.