A Grade II* Listed Building in City and Hunslet, Leeds 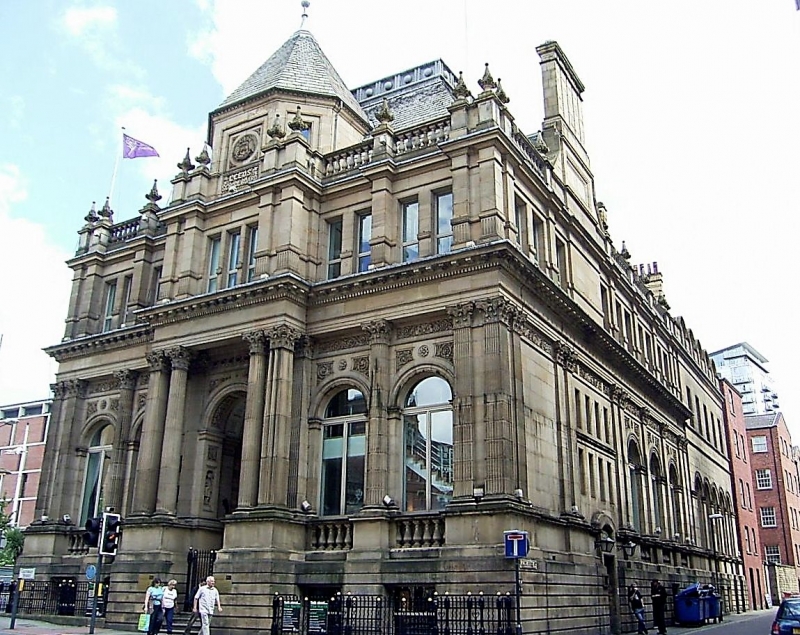 Formerly known as: Education Offices CALVERLEY STREET.
Offices of the Leeds School Board with basement railings, now
offices with bar in basement. 1879-81, converted 1994-95. By
George Corson. Ashlar: rusticated basement of
Burley-in-Wharfedale stone, Pool Bank stone above, grey slate
and lead roof, cast-iron railings.
2 storeys with basement and attic, 5x10 bays. In Italianate
style matching the Municipal Buildings to south (qv) and
complementing the Town Hall, Victoria Street opposite (qv).
Central entrance in projecting bay with round arch flanked by
paired columns, niches with half-size statues of schoolgirl
and schoolboy in the reveals, steps up to modern glass
entrance screen, walls lined with buff terracotta moulded
tiles. Round-arched ground-floor windows with carved
spandrels, rectangular windows to 1st floor; superimposed
orders of attached columns and pilasters, coupled at corners,
entablature at floor levels and balustered parapet with urns
over pilasters; central attic pavilion with octagonal roof has
a plaque carved with the Leeds coat of arms and the words:
'LEEDS SCHOOL BOARD' in relief.
Pavilion roof with moulded lead parapet and tall moulded
attached chimneys on left and right returns. Left return: end
4 bays and stair turret with pavilion roof project on left,
basement entrance to left of centre. Right return: similar
details, entrances at each end. Railings: geometric design.
INTERIOR: the recessed round-arched entrance porch is
continued as a central corridor to the rear of the building
and the stairs, rooms opening off each side. The corridor is
barrel-vaulted and divided into 11 bays by fluted pilasters
and panelled ribs; the walls of terracotta tiles with moulded
bands of geometric and flower motifs, now painted; doorcases
with plaster surrounds of leaves, roll mouldings; moulded
cornice, polychrome floor tiles and original cast-iron heating
grilles. The front room left was the principal meeting room;
gallery at E end over an ante-room.
A cantilevered stair with twisted cast-iron balusters and
wooden handrail extends to the Alexander Street left entrance


and the basement. An arcade of round arches with stone columns
towards the E end of the building rises through the upper
floor and is obscured by later partitioning. The main
staircase at the E end of the building is of an unusual
double-helix form, with entrances from Great George Street and
Alexander Street opening onto separate stone cantilevered
staircases around a single top-lit open well, supported on
short columns with stiff-leaf capitals and having wooden
handrails and walls lined with white tiles with bands of blue
and brown with flower motifs.
First floor: the main staircase gives access from both flights
to an ante-room with polychrome tiled floor and tiled walls as
staircase. The attic storey has had an additional floor level
inserted. The basement has been converted to a bar; the
original floor plan has been lost.
George Corson's original design was for one single building
from Centenary Street to Great George Street to house the
Municipal Offices, library and School Board Offices; this was
modified to separate the School Board premises by the line of
Alexander Street but the 2 buildings are similar in design and
Corson considered the group to be his most important design.
HISTORICAL NOTE: in 1870 the Elementary Education Act was
passed, promoted by the Bradford mill owner WE Foster. The
country was divided into areas governed by School Boards which
were responsible for the education of children up to 10 years.
Leeds School Board was established in November 1870, the
members elected by the public and an assessment of needs
showed that out of a total of 58,000 children needing
education under the new Act only 12,000 were then receiving
it.
George Corson was one of the architects involved in the design
of new schools for the Board but was criticised for
extravagance; these prestigious new offices contained board
and committee rooms on the ground floor, together with offices
for clerks and attendant officers; the large examination room
on the upper floor was reached by the impressive double
staircase from boys' and girls' entrances from Great George
and Alexander Streets. The School Board architect's offices
were probably also in the building; although the Board decided
to commission individual architects to design their schools
from 1879 Richard Adams, their architect since 1873, continued
until 1886.
School Boards were abolished in 1902 when the new Education
Act was passed and responsibility for secondary education and
aid for denominational schools was added to the
responsibilities of the Education Committees.
(Williams, D: Leeds School Board and its Architecture (B.Arch
thesis): 1975-; Butler Wilson, T: Two Leeds Architects