A Grade I Listed Building in Guildhall, York 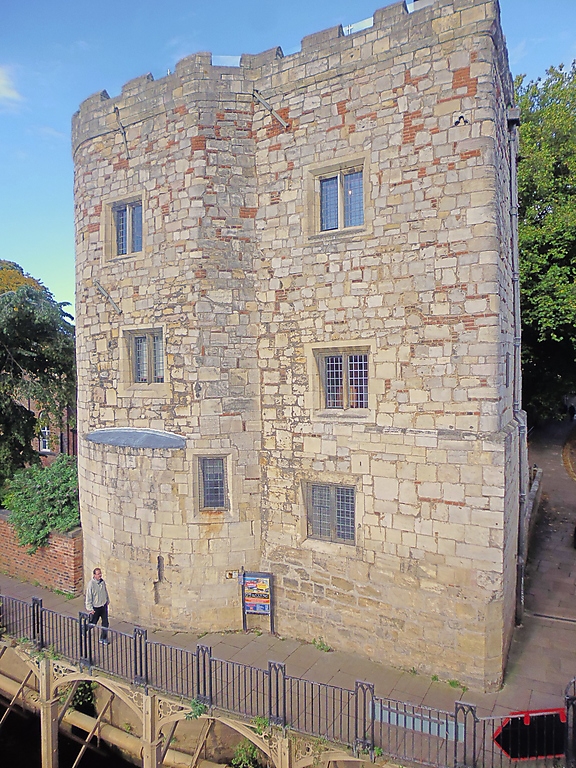 Defensive tower converted for use as water tower, now used as
offices. c1300; heightened 1616, strengthened and extended
c1677; altered for offices c1846; refitted 1932. Magnesian
limestone, much re-used and including carved fragments of
canopy, finial and other mouldings from the ruins of St Mary's
Abbey (qqv): roof not visible but said to be of copper.
EXTERIOR: 3-stage circular tower with extruded circular stair
tower, on chamfered plinth; 3-storey extension. All parts are
embattled. Tower entered through Lendal Hill House (qv):
unused C19 shouldered doorway with panelled double doors
survives in extension. Blocked slit lights are visible on
ground floor of both towers: 1- and 2-light windows elsewhere
in chamfered openings with chamfered mullions.
INTERIOR: not inspected. RCHM record brick partition wall on
the lower storeys retaining evidence of engine housings;
wooden spiral staircase in stair tower; rooms on first and
second floors fitted with panelling.
HISTORICAL NOTE: the tower was leased to the Waterworks
Company by the York Corporation in 1677 for 500 years in
return for a peppercorn rent, still paid annually by the
Company in 1994.
(An Inventory of the Historical Monuments in the City of York:
RCHME: The Defences: HMSO: 1972-: 108).