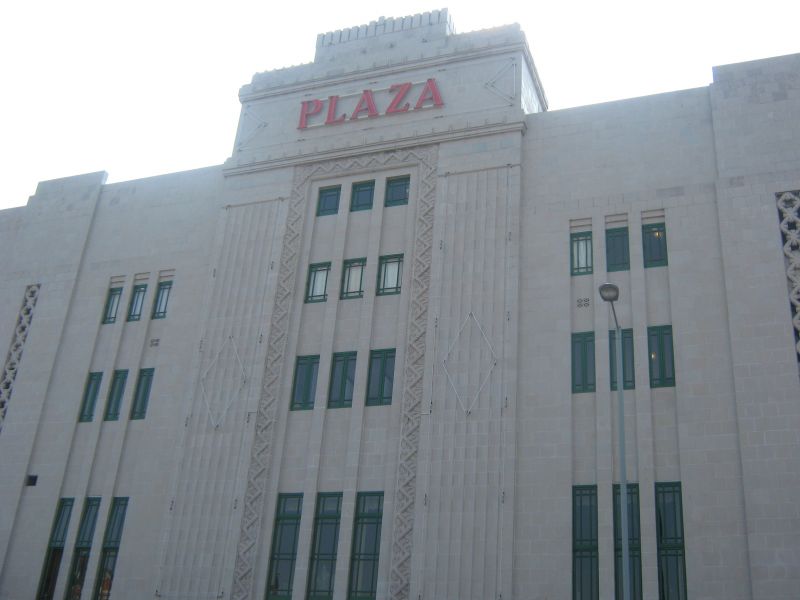 II*
Cinema (bingo hall when surveyed). Designed in 1929, built 1932-33 to the designs of W Thornley, LRIBA. Brick, clad in faience to front, with much internal structural steelwork. Double-height auditorium set behind narrow entrance facade, set into cliff Facade a symmetrical composition over low entrance. Tall, mostly blind elevation ranged as a series of recessed and projecting planes, in which the small windows are set back in vertical bands and are now blocked. Openwork grilles to either side. Centrepiece with two giant fluted pilasters supporting higher and more decorated parapet than those to either side, with dog-tooth cornice and high frieze. In centre, two pairs of double-doors with Art Deco fountain motif: slight set back.

INTERIOR: narrow foyer with sunburst-pattern cornice and soffited ceiling leads to large auditorium (originally intended for 1,873 patrons). Similar detailing on staircase. Double- height auditorium with gallery and small stage. Heavily soffitted and panelled ceiling steps down to broad, square proscenium arch with moulded surround, in front of which is shallow semi-dome. A laylight set above the rear circle. Auditorium canted to either side to incorporate sound room for Compton organ -which survives with "jellymould' glass surround in front of stage -and Art Deco grilles topped with anthemion mouldings. Next to either grille, paired columns with Corinthian capitals flank a partially-glazed recess with stepped mouldings. Under these, large plaster friezes of dancing maidens, demonstrating the influence of the 1925 Paris Exhibition of decorative Arts on the mouldings used here. Above all these features a deep, fluted frieze and shell-pattern cornice. Under the circle, the ceiling has a dome and trough lighting. Pilasters over exit doors, with shell-like terminals. To gallery sides, three-bay arcades with square columns and decorative grillework to balustrades. Fluted and curved balcony front. 1930s seats with fluted ends survive in gallery. Timber balustrade at rear. Underneath balcony simpler, but has pilasters with fluted capitals. Above the foyer is a long, first-floor restaurant overlooking the town, with trough lighting in the ceiling on two levels. A narrow passage links the two sides of the circle. The stalls crush lounge below also has a moulded ceiling.

Included as a remarkably lavish exercise in the Art Deco style, with many motifs derived directly from the 1925 Paris Exhibition. These features were enhanced by a sophisticated concealed "Holophane" lighting system, fragments of which survive. This is an exceptionally complete example of a 1930s 'super' cinema, which survives little altered and retains its Compton organ.