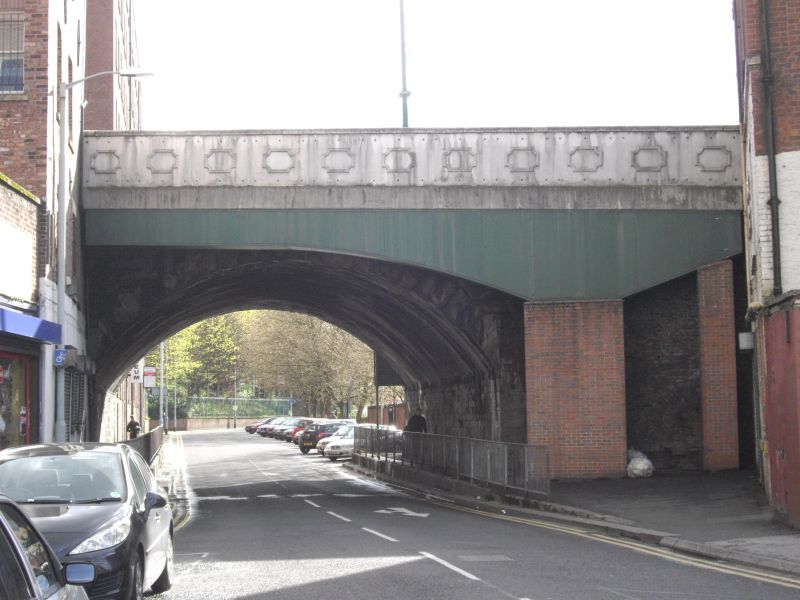 II
Road viaduct. 1824-6 to designs of James Nowell for the Manchester and Buxton Trust. Gritstone, concrete, cast-iron.
EXTERIOR: Eleven segmental arches of varying spans, the arch spanning the River Mersey being 27.4m wide. River arch has voussoirs and coursed stonework to west side, adjoining arch to the south has radiating stonework to its west side, and southernmost visible arch (over Daw Bank) has voussoirs and coursed stonework. The remaining visible arches are rendered on west side. Widened on east side in concrete, except for arch over Daw Bank where a cast-iron deck was added to east side. The widening was part of the Mersey Square Improvement which is commemorated on a plaque set on the east side of the viaduct. Parapet a modern coursed stone replacement retaining two earlier elements on west side with decorative stone capping. One has a plaque stating `Wellington Bridge', the other with individual metal letters spelling out `Wellington Road North' and a pointing hand.
HISTORY: On 23 March 1824 an Act of Parliament gave the pre-existing Manchester and Buxton Trust the right to construct Wellington Road, a straight road running for about 3 ½ miles in a north-south direction, crossing the lowest part of the river valley by means of the viaduct. It was built as a means of avoiding the existing more congested route through the historic town centre. The cost of the road and viaduct was £36,000. The formal opening took place on 3 July 1826. By 1900s a new open square known as Mersey Square had been created alongside the east side of Wellington Bridge, its two halves linked by a new bridge. In 1935, as part of an improvement scheme, the river between the two neighbouring bridges was covered over, and Wellington Bridge was widened.

REASONS FOR DESIGNATION DECISION:
Wellington Bridge is designated at Grade II for the following principal reasons:
* It is an intact 1824-6 stone viaduct of eleven arches carrying the road above the lower river valley to avoid congestion caused by the town's topography
* The structure is an impressive early C19 engineering feat undertaken by a turnpike trust
* Together with the brick railway viaduct (q.v.), which runs parallel to the road, it forms an important part of the dramatic transport infrastructure of Stockport's urban landscape.