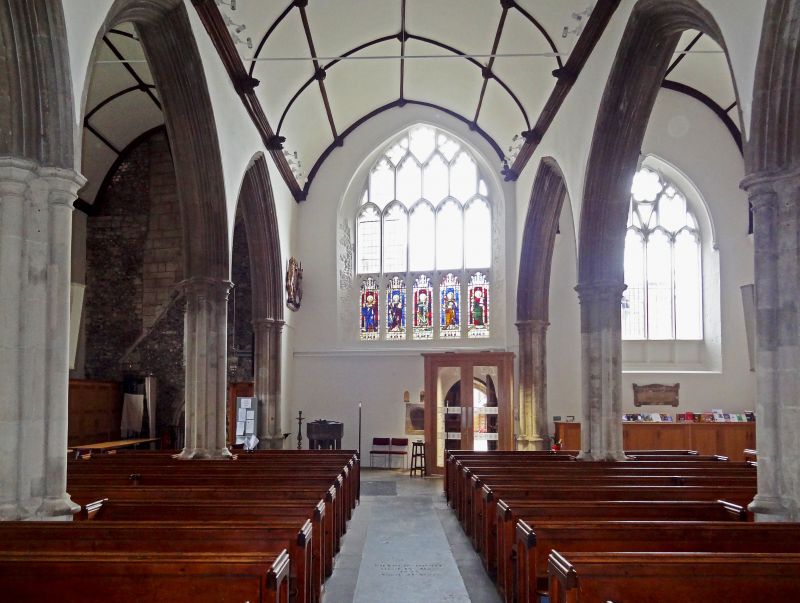 Plan: Four-bay nave with full-length north and south aisles. Three bay chancel with choir vestry (north), south chapel, and an octagonal sacristy at the north-east angle off the choir vestry. The main entrance at the west, flanked by a steeple to the south, and a low medieval chapel (now vestry) to the north.

Exterior: The west end is dominated by the 14th tower and spire, perhaps on the site of an earlier tower. It has angle buttresses, small single-light lower windows, and two-light bell openings with curvilinear tracery going towards Perp, i.e. perhaps c1350. The solid plain parapet hides the base of a slim spire with roll-moulded angles and three bands of roll-moulding around it. The porch is flanked to the north by a single-storey ashlar addition, originally a Corpus Christi chapel probably of the 14th century. It was tidied up by Wyatt & Brandon (1849-50) on conversion to a vestry, including two three-light Perp windows, a solid parapet, and a chimney stack in the adjoining north aisle gable. The north aisle has regular buttresses, and three-light Perp windows with renewed Victorian tracery. An octagonal sacristy off the north-east angle is probably c1885-6, of flint with small Perp windows and cap roof. The chancel has single lancets of the 13th century, and sign of the original putlog holes for scaffolding. A stepped triple lancet east window was inserted in 1849-50 to replace a Perp window. Above it is a small foiled rose in the gable. The south aisle has Perp windows, probably 19th century renewals like the north. The matching south and north aisle east windows must be of 1849-50, Perp but not replicating the Perp design depicted by J.M.W. Turner in the early 19th century. On the south wall, against the second buttress from the east, is a 15th century rood stair projection.

Interior: The passage-like entrance runs between the tower base and the west chapel. Inside, it is clear that the tower is not aligned with the nave and south aisle, probably because it follows the foundation of a tower of the previous church. The south aisle west wall masonry shows how the aisle developed: from a low lean-to with a sloping west wall, in which is a doorway no later than the late 13th century. Onto this slope the ashlar tower was built, and the aisle later widened beyond it. The nave and aisles are regular, the result of 15th century heightening and rebuilding. The arcade piers have four almost freestanding shafts with concave hollows in between, moulded capitals and broad ogee-moulded arches. (Pevsner distinguishes 14th and 15th century work here from the bases and capitals, which are round at the north aisle east end, polygonal elsewhere; but this distinction is not upheld by more recent analyses of the Perp style.) The nave and aisle roofs are 15th century, wagon-vaulted with panels of thin timber ribs with bosses. In the wall of the south chapel are the openings and staircase to a rood-loft. The north chapel is now enclosed at ground level for a vestry, with organ gallery above it. The gallery parapet is pierced with flowing tracery, probably by C.E. Ponting, c1890s-1910s. Unusually the church has two chancel arches, that to the west perhaps 15th century, that one bay east all Victorian, but on the line where the 13th century chancel arch must have been. High up in the east end of the north aisle is a 15th century corbel head wearing spectacles. The window splays of the north aisle have rere-arches on corbel heads that face into the window recesses. The floors are of oak parquet beneath the nave and aisle seating, otherwise of stone with numerous 17th century and later ledger slabs, especially in the chancel.

Principal Fixtures: The chancel was swept bare of its Edwardian adornments c2006, in favour of a spare design focused entirely on a new altar designed by David Gazeley of Watts & Co: of admirably high quality, in Purbeck stone with inset cosmati panels, surrounded by gilded brass Neo-Gothic panels representing the twelve gates of the new Jerusalem. The delicately carved and traceried rood screen with rood group above is by C.E. Ponting, 1918. A more conventionally Perp screen in front of the south chapel is probably from the 1880s restoration. Pevsner compared the fine later 15th century eagle lectern with examples at Croydon, Bovey Tracey, Devon, St Nicholas (now at St Stephen), Bristol, etc. It is made of latten, a brass-like alloy of copper, zinc, tin and lead. The font is 13th century, of Purbeck stone, octagonal bowl with cusped trefoil-headed panels, on plain cylindrical legs. Elaborately carved stone pulpit of 1884. The south chapel reredos is by C.E. Ponting, removed c. 2006 from the sanctuary. In the south aisle wall is a medieval alabaster Annunciation group, much restored when it was uncovered c1885-6. The nave and aisle seating is by plain Victorian pine benches, probably by Wyatt & Brandon. In the porch is a chest tomb with ogee panelled front set in an arched recess, perhaps early 16th century. Its brasses are missing. Splendid Rococo monument to Bennet Swayne d. 1748, who "by his will directed this monument to be erected": black marble or slate obelisk with a double portrait medallion, over a sarcophagus on an inscribed base, with supporting scrolls, attributed stylistically to Sir Robert Taylor. Adjacent is a more modest tablet to the Ludlows of Clarendon, 1749, with plentiful decoration, still Baroque. A good array of more minor Neoclassical tablets in the aisles. Stained glass. Consistent sets of glass by two makers: the east window and three in the north aisle by Christopher Webb (1930-1); and six in the chancel, three in the south chapel, three in the south aisle, and the west window all by Clayton & Bell, 1870 - c. 1890. The church retains Royal arms of Elizabeth I and of James I (carved, on a strapwork base). Also, in the south aisle, several good hatchments.

History: The church lies on the south flank of Milford Hill, roughly due east of Salisbury Cathedral and outside the current city centre. Exploratory excavations under the present chancel c. 2003 uncovered three Saxon child burials below the numerous post-medieval burials in brick vaults. So it is seemingly of Saxon foundation, probably rebuilt or enlarged in cruciform shape by the Normans, and rebuilt again from the 13th century, presumably prompted to some extent with the movement from Old Sarum and the new Cathedral begun in 1220. The tower was added probably in the 14th century, and the aisle was rebuilt and heightened in the later 15th century, giving the building roughly its present form.

The architect of the restoration, Thomas Henry Wyatt (1807-1880) was a member of an architecturally prolific family, and trained under Philip Hardwick. Wyatt became district surveyor for Hackney in 1832, and from 1838 till 1851 was in partnership with David Brandon with whom he developed a successful practice designing mansions, schools, parsonages, new churches and restorations. Wyatt was honorary architect to the Salisbury Diocesan Church Building Society, which brought him commissions for at least 16 new churches in Wiltshire and the restoration of some 30 more. C.E. Ponting (1850-1932) of Marlborough was diocesan surveyor for the Wiltshire region of the diocese of Salisbury 1883-1928, of the Bristol region 1887-1915, and the Dorset region 1892-1928. His obituary in The Builder (93 (1932), p 272) says `Some 225 churches benefited by his sympathetic work, either in the way of restoration, repair or additions, or in the provision of furniture or fittings, always of a harmonious character...Further he was entrusted with important works at Salisbury Cathedral in the underpinning of the foundations and repairs to the spire.' He never became a member of the RIBA.

Reasons for Designation: The church of St Martin, Salisbury, is designated at Grade I for the following principal reasons: