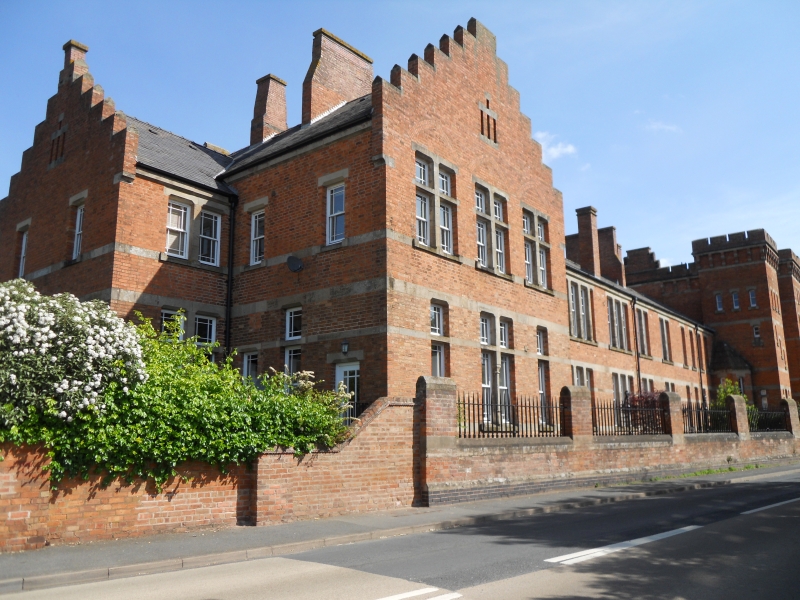 NORTON JUXTA KEMPSEY
SO 8651
CROOKBORROW ROAD,
Norton (West side)
648-0/4/943
Former Keep and flanking wings, Norton Barracks
23.9.86
II
Barracks armoury, guard house, store and married quarters, now flats. 1877, designed at the War Office by Major H C Seddon RE; converted 1994. Brick with stone dressings, brick axial stacks, lateral stacks to the central keep, and hipped slate roof Fortress Greek Revival style. PLAN: Square central keep with ground-floor guard room and store above, and double-depth ranges each side. EXTERIOR: 3-storey and basement keep, 2-storeys and basement each side; 3:9:3:5:3:6:2:3-window range. Central entrance block has corner towers set forward and pseudo-machicolations to a crenellated parapet; flush ci11 and lintel bands, and eaves cornice. Central segmental archway has moulded arch and small doorway to the left with shouldered lintels, a label mould, narrow windows, with transoms to the first-floor of the centre and the right-hand tower, and 6/6-pane sashes. To the left of the left-hand tower is a canted corbelled oriel with rifle slits. 1-, 2- and 3-1ight windows to flanking ranges; end cross ranges have crow stepped gables set forward and to the ends, the right-hand one with a projecting parapeted section set forward to the left. Rear elevation similar, the N range has two crenellated 2-storey porches with steps up to round-arched entrances beneath tripartite windows. INTERIOR: Axial corridors, basement lock-ups, fire-proof keep has cantilevered dogleg stairs with cast-iron balusters, and central rooms with jack-arch ceilings. HISTORY: The Keep was a secure store for arms and equipment, as well as the guard house to the barracks, and was the characteristic building of the Localisation depots. These were built as part of the Cardwell army reforms, which were intended to strengthen the connection between a regiment and its locality, to assist recruitment. Originally the front range to a parade square and barracks, and including married quarters. One of only ten surviving examples of this important symbolic building. (SA YE Britain's Heritage: Deserted Bastions, Historic Naval and Military Architecture: London: 1993-: 123; The Buildings of England: Worcestershire: London: 1968-: 227; Watson Colonel Sir H M: History of the Corps of Royal Engineers: Chatham: 1954-: 157-160).