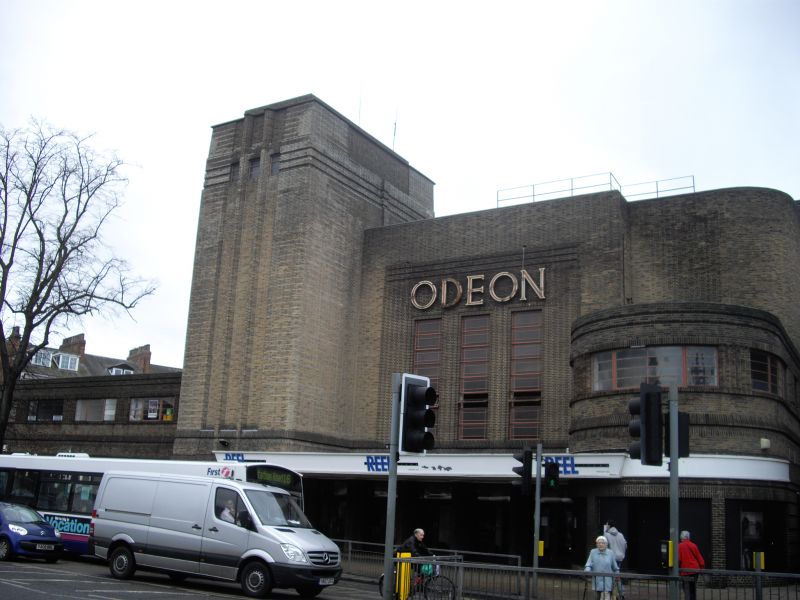 EXTERIOR: 1-storey front range with 3-storey block behind and tall projecting tower block at left; at each end are 2-storey wings, right one projecting forward of main block; cantilevered canopy extends width of front range from wing at right. Ground floor of all parts rusticated with horizontal brick bands; first floor of wings set back slightly over chamfered moulded brick band; wings and tower block banded horizontally at parapet level, and tower has plain parapet.
Flat roof. Five pairs of glazed doors between round-ended piers set back beneath canopy. Main block behind has three vertical strips of 1-pane windows set in stepped brick panel. Tower has one set of double doors deeply recessed in plain
opening: upper storeys relieved by parapet-height recessed panel divided by full-height vertical ribs. Shopfronts in the wings are framed in timber, and have recessed glazed doors with overlights and plate glass windows with transoms and
integral blind boxes. On first floors, windows are grouped and banded between sill bands and soldier brick arches. Windows in rounded ends of both wings are curved on plan. All upper floor windows are metal-framed casements or pivoting lights. Left and right returns are articulated in full-height pilaster strips and have scattered fenestration.

INTERIOR: The entrance foyer is accessed through 4 sets of glazed doors from a central lobby. There is a sales area (replacement) to the rear and right, doors to the lower screens (formerly stalls) to the rear, and stairs to the upper foyer to the left, all separated by deep rounded pilasters. To the right at the front is a former separate shop area with semi-circular frontage to the street. The stairs divide and lead to the upper foyer which has doors to the main screen (formerly circle) and the managers office above the former shop. The ceiling is suspended, and above the walls are wallpapered, covering the reported mural. In the auditorium, the main proscenium arch remains, and the circle seating area has been extended forwards with imported seats to form a single screen. The original projection box and ancillary rooms, including rectifier, ventilation equipment and battery rooms, survive with original doors. Some ventilation grilles and parts of the decorative scheme at the sides of the auditorium remain. Below, two small screens have been inserted in the orchestra pit, using the former stalls area for seating.

REASONS FOR DESIGNATION
The Odeon cinema, York is listed in Grade II for the following principal reasons:

* The architecture, in Art Deco style, is well designed and executed, and is a good example of Odeon cinema design
* External survival is very good, with original original windows and other design details surviving in both the cinema and associated shops
* Elements of the original layout of the cinema survive, including the upper part of the main auditorium, proscenium arch and main staircase, enabling the original design and main circulation spaces to be read
* Elements of the decorative scheme such as ventilation grilles and side panels in the main auditorium survive
* The surviving ancillary rooms, such as ventilation, rectifier and battery rooms, are rare complete survivals.