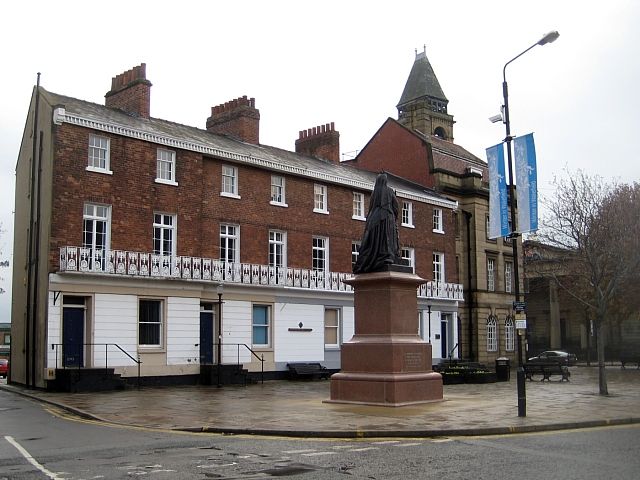 Heroic size bronze figure of Queen Victoria in state robes with a crown and holding a sceptre in her right hand, set on a square, two-tier bronze plinth with pennant decoration to upper tier. Signed on the lower tier of the right-hand side elevation: A.B. BURTON / FOUNDER / THAMES DITTON. Bronze set on a tall, square, stepped plinth of polished pink granite. The central section of the front face is inscribed VICTORIA REG ET IMP / 1837-1901. At a lower level is a second inscription: THIS STATUE WAS ERECTED BY THE CITIZENS OF WAKEFIELD / AS A MEMORIAL TO THEIR GREAT AND GOOD QUEEN / 1904. The left-hand side elevation has the inscription THIS MONUMENT WAS REMOVED / FROM THE BULL RING / TO THIS SITE IN JULY 1950 / CLARENCE PARK / AND REINSTATED IN 1985.

HISTORY: This memorial to Queen Victoria was unveiled on 15 February 1905, and a telegram was sent to King Edward VII from the citizens of Wakefield declaring their affection for the late Queen and loyalty to the Monarchy. The sculptor was Francis John Williamson who was patronised by Queen Victoria and produced many statues of her. It is based on his marble statue of Victoria sculpted in 1887 at the time of her Golden Jubilee. Williamson then executed many bronze replicas including statues in Wakefield, Hastings, Paisley, Londonderry, Rangoon in Burma, Perth in Australia, Auckland and Christchurch in New Zealand. The Wakefield statue was cast by A B Burton of the Thames Ditton bronze foundry in Surrey, which was initially founded in 1874 as Cox & Sons, ecclesiastical suppliers of cast ornaments and statues, and became well-known through the production of a large number of major castings. After a number of owners it was known as A B Burton from 1902 to 1933.

The statue was first erected in the Bullring in the centre of Wakefield. In 1950 it was moved to Denby Dale Road at the entrance to Clarence Park. Following the pedestrianisation of the Bullring in 1985 the statue was returned. In 2008 it was cleaned and restored before being relocated in 2009 to Castrop Rauxel Square off Rishworth Street.

REASONS FOR DESIGNATION
The 1904 statue of Queen Victoria standing in Castrop Rauxel Square, Wakefield, is designated at Grade II for the following principal reasons:

* Sculptural Interest: the statue, which depicts Queen Victoria at the time of her Golden Jubilee in 1887, is of high quality, being modelled by the noted sculptor Francis John Williamson, who was patronised by the Queen and produced many sculptures of her, and was cast by A B Burton of the well-known bronze foundry at Thames Ditton, Surrey
* Historic Interest: as a good representative example of a commemorative memorial of Queen Victoria, demonstrating the regard with which she was held by her citizens throughout the country.