A Grade II* Listed Building in Widecombe in the Moor, Devon 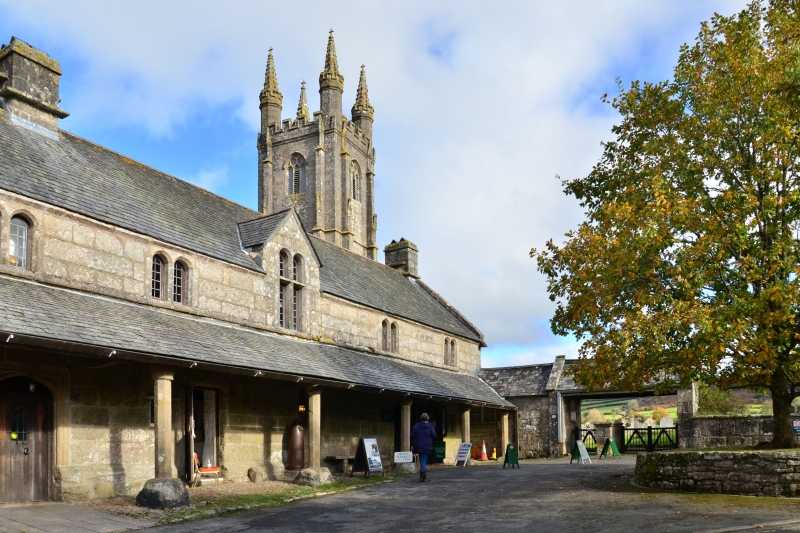 Civil Parish: Widecombe in the Moor

Find accommodation in
Widecombe in the Moor

Village hall and National Trust shop, formerly the church house. Early C16,
somewhat restored externally and with minor additions, probably of late C19.
Granite ashlar. Slated roof with gable-parapets and kneelers. 3 granite ashlar
chimneystacks, one on ridge and one on each gable, all apparently rebuilt in C19. A
smaller chimney of same type on rear wall. 3-room ground plan, the 2 right-hand
rooms now amalgamated; 2 matching rooms in upper storey. The shop, formerly the
sexton's cottage, occupies the left-hand room on each floor. 2 storeys. 5-window
front with hollow-moulded plinth and chamfered granite eaves-cornice. Across the
whole front of the ground storey runs an open colonnade supporting a slated pent
roof. There are 7 octagonal granite columns with moulded octagonal capitals; no
bases, but the shafts stand on rough octagonal granite plinths. The roof structure
seems to be mostly pre-C19, apart from the common rafters; however, the 4 eastern
trusses have heavier timbers and the collars are tenoned to the principal rafters,
instead of being halved. In the ground storey the sexton's house has a narrow,
hollow-moulded window with a slightly curved top to left. To right are 2 doorways
with 4-centred arches, the left-hand one converted into a window. This latter is
simply chamfered but the doorway to right has a three-quarter-round moulding and
carved spandrels. The village hall section has a small doorway to left, possibly a
former window; the left jamb and lintel are hollow-moulded, the lintel with the head
of a mullion in its centre. The left of this is an inserted C19 window, to right a
2-light mullioned window with rounded heads having carved spandrels. At the right-
hand end is a wide doorway, probably a C19 insertion. To right of it is a 2-light
mullioned window with a flat head. In the upper storey all the windows appear to be
original, except for a C19 gabled dormer in the centre, although some of the window-
heads may have been restored. These older windows are hollow-moulded with round
arches, the left-hand window of 3 lights, the remainder of 2 lights. Beneath the
windows at sill-level runs a granite stringcourse which also forms a drip for the
pent roof of the colonnade. The rear wall has 3 similar upper storey windows of 2
lights. In its centre is a double external staircase of granite rubble with an
enclosed chamber of granite ashlar on top; this could well be a C19 addition,
although there is no sign of an original staircase elsewhere in the building. The
main access to the upper storey of the village hall is by a C19 stair wing built on
at the east end.
Interior: ground storey of Church House is now occupied by one large room, but it is
clear from mortices on the soffit of one of the upper-floor beams that there was
originally a very small room at the east end, separated from the rest by a stud-and-
panel screen. The upper-floor beams of the main part of the room are of oak and
finely moulded, with intersecting beams forming 3 compartments across the width of
the room; a few timbers have been renewed, but the greater part of the C16 structure
survives. The beams have hollow ogee and three-quarter-round mouldings, these
extending to half-beams along the front and back walls. The joists are arranged in
chequer pattern, running in opposite directions in adjacent compartments; they have
ogee mouldings on the sides and a three-quarter-round moulding on the soffit, the
mouldings terminate with leaf-shaped bar-stops. The small east section has a
chamfered beam and plain joists. The front door at the west end has an old wooden
lintel with ogee and hollow moulding, possibly a re-used timber. In the east gable-
wall is a medium-sized fireplace (surprisingly small for a building of this type)
with plain stone jambs and an ornately carved wood lintel, probably brought from
elsewhere; it has ogee, three-quarter round and hollow mouldings upon which at
intervals rest a rose, a thistle, a fleur-de-lis, a harp and 2 other flowers. In
the back in an oven with a round-arched stone opening having a shallow stone shelf
beneath it. In the rear wall of the western section is a still smaller fireplace,
apparently original, with a rectangular, hollow-moulded granite surround. In the
west wall dividing Church House from Sexton's Cottage, are 2 plain wide fireplaces
with flat, unmoulded granite lintels. The upper storey has no features, except for
a small, plain granite fireplace, probably of C19, in the rear wall. The roof
structure, which is completely exposed to the room below, is original, apart from a
few replacement timbers. It consists of 11 side-pegged jointed-cruck trusses with 3
tiers of threaded purlins and no ridge; the collars, which are either cambered or
slightly cranked, are tenoned to the principals. The undersides of the collars and
the section of principal rafter below them are lightly chamfered. Some trusses
carry gouged carpenter's marks. None of the trusses appears to have supported a
partition. The Sexton's Cottage seems to have been altered in C19, but retains 4
jointed-cruck trusses matching those in the Church House. There is a medium-sized,
plain granite fireplace with canted sides in the west gable-wall of the ground
storey.
The building was still in use as a church house in 1608. In mid C19 the poor house
occupied the ground storey and the village school the upper floor. Acquired by the
National Trust in 1933. Accounts show the roof was thatched until the late 1880s.
Source : R Dymond, ed., Widecombe, 1876, p.49.