A Grade I Listed Building in Nottingham, Nottinghamshire 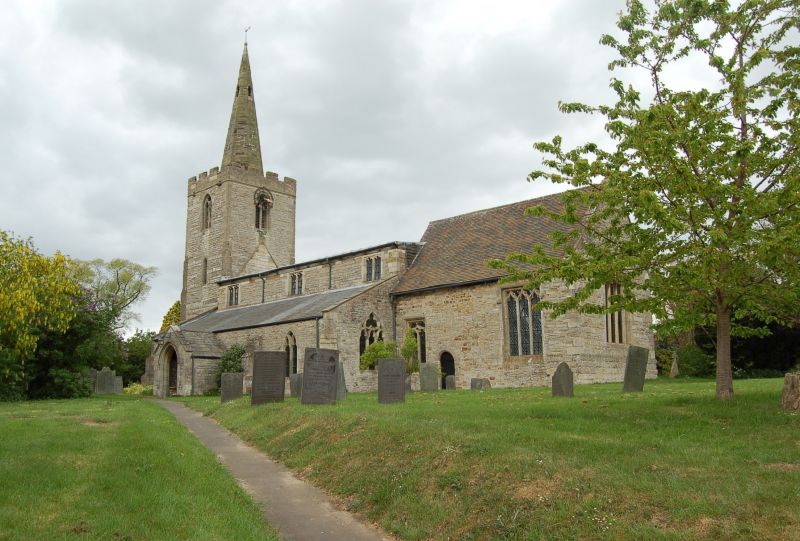 WYSALL MAIN STREET
SK 62 NW
(west side)
6/150 Church of
Holy Trinity (formerly
13.10.66 listed as Holy Trinity Church)
G.V.
I
Parish church. C12, C13, C14, C15, C17, C19, restored 1874.
Dressed coursed rubble, some ashlar, weatherboarding to east
nave. Slate, plain tile and lead roofs. Coped gables with
single ridge crosses to the east chancel and porch. Tower, nave,
south aisle, south porch and chancel. Diagonal buttressed single
stage embattled C13 tower topped with spire with 4 lucarnes.
Remains of 2 gargoyles to the west, north and south sides. West
side has a single arched C14 window with single transom with 2
cinquefoil arched lights above and below, cusped tracery, hood
mould and worn label stops. In the south wall is a single C13
lancet. The east side has evidence of former nave roof. The 4
C14 arched 2 light bell chamber openings have cusped tracery,
over that on the east side is a single clock face. The north
wall with C12 masonry has a C12 arched doorway with hood mould
and remains of single right human head label stop. To the left
and set high into the wall is a single small C12 arched light.
Further left are 2 C14 arched windows each with 2 trefoil arched
lights. In the C15 clerestory are 2 restored windows each with 2
trefoil arched lights under a flat arch. The north and east
chancel walls are set on plinths the north chancel with no
openings, the east chancel has a single C17 3 light ashlar
mullion window under a flat arch with segmental arched hood
mould. The rebuilt south chancel has a single C14 3 light window
with cusped tracery under a flat arch, remains of 2 human head
label stops. To the left is a round chamfered arched doorway and
on the far left a single C14 2 light window with cusped tracery,
under a flat arch. The east end of the south aisle has a single
C14 window with cusped tracery. The buttressed south wall has a
single C14 arched window with 2 trefoil arched lights. The C19
gabled porch with double chamfered arched entrance, hood mould
and label stops has an inner chamfered arched doorway with
imposts, hood mould and worn human head label stops. To the left
is a single similar 2 light window. The clerestory corresponds
to the north, however there are 3 windows. Interior. 3 bay C15
nave arcade, the east pier consisting of single central jamb
flanked by single engaged octagonal columns, west octagonal
column and octagonal responds. The west respond and the west
side of the east pier with capitals decorated with upright nobly
leaves. The remainder with moulded capitals. Double chamfered
arches, the west pier with stops to the outer order forming
carved heads. Tall C13 double chamfered tower arch, the inner
order supported on foliate decorated corbels. Fine C15 chancel
screen with open panel tracery, the east side with 4 misericords.
In the south chancel is a single trefoil arched piscina, to the
right is a single C14 stoup with carved human head. Reredos with
7 bay blind arcading. To the left of the north east nave window
is a small rectangular niche. C15 nave roof with bosses carved
in the shape of heads. C15 chancel roof with arched wind braces.
C17 altar table with turned legs. C15 pulpit with blind
traceried panels. C13 bulbous circular font. 3 C17 benches.
Medieval ladder to bell chamber. C18 candelabra in the chancel.
Benefactions board on north wall of the nave. Heraldic painted
wooden memorial to George Widmerpool, 1689. In the chancel is an
alabaster memorial to Hugh Armstrong of Thorpe, 1572 and his
wife, Mary. The sides of the tomb are decorated with 7 figures
and shields. The recumbant figures are in contemporary dress, he
as a knight with feet resting on a lion and head on a visor, she
with head on a pillow.