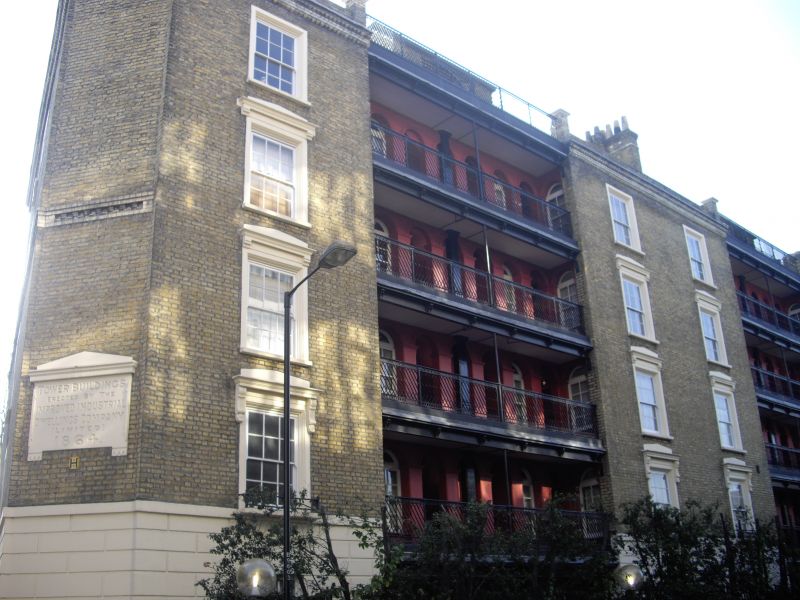 2.
1864 'erected by the Improved Industrial Dwellings Company". A tenement block of
rather more intricate plan type than usual. Five storeys with rusticated stucco
ground floor, splayed corners to returns. Single bay blocks of stock brick flank
the north elevation with a 2 bay similar block to centre. Stuccoed elevations of
7 narrow arcaded stucco bays, set back and screened by superimposed balcony-
galleries still with Regency pattern ironwork of diagonal geometric design, carried
on cast iron girders and slender iron shafts and set on roof terrace. The stairs
to centre of each gallery set in shallow semi-circular well running behind central
blind archway of arcade through which rises full height dust shoot. Passage entries
to flats on south side at each end of gallery arcade. Windows on projecting blocks
have stucco architraves with cornices on consoles and block pediments. 1860 ornate
cast iron work flower guards to first floor. Casement windows. South elevation
has complex rhythm of single and paired bays projecting from 5 sided well recesses.
Moulded brick cornice. Casement windows. Of special interest as a now extremely
rare example of early metropolitan working class housing. Probablyfthe designs of
W Allen, and promoted by Alderman Sydney Waterlow, founder of the profit-waking
"Improved Industrial Dwelling Company" (1863, one year before the erection of this
block. The company was to house labourers for the rest of the century). The plan
breaks from the courtyard type most popular in early dwelling blocks (1840's
onwards) in favour of a block with better ventilation. For the sane reason
lavatories are placed at the back of the flats, instead of next to the entrance, as
previously. Historic interest as an early example of its kind.