A Grade I Listed Building in Muggleswick, County Durham 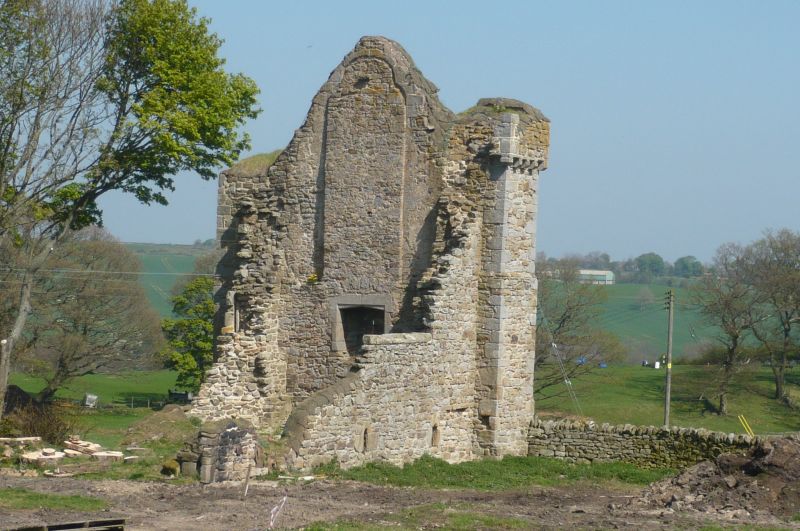 NZ 05 SW MUGGLESWICK MUGGLESWICK
4/104 Remains of Manor
House at Priory Farm
6/2/52
GV I
Remains of lodge and grange of manor of Muggleswick. C13 for Hugh of Darlington,
Prior of Durham 1258-72. Sandstone rubble with quoins and ashlar dressings.
L-plan west part, and much of 3 sides of east part, of long range, linked by
early C20 byres.
West wall survives to height of c.5 metres, and has some large irregular quoins;
2 low square-headed openings, the north with large triangular stone as lintel
and the south with irregular stone lintel; 2 courses above sill level of upper
storey show one opening with irregular-block jambs. About 3 metres of south
wall survive, without features.
East part has most of east and parts of north and south walls of rectangular
building originally 2 storeys high and perhaps 3 bays. East wall has clasping
buttresses, the right wider, with top corbels; parapet partly survives. Tall
slightly-chamfered round-headed panel contains blocked 2-centred-arched window
with cusped intersecting tracery; further blocking in lower part continues from
ground and forms later chimney. South wall has one small chamfered lancet.
North wall has small narrow slit window with chamfered surround, and small
chamfered lancet above.
Interior shows first-floor flat-Tudor-arched fireplace inserted. One medieval round
pier survives in linking C20 farm building, which is otherwise not of interest.
Source: Greenwell and Knowles 'Muggleswick Prior's Camera' in Transactions of
the Architectural and Archaeological Society of Durham and Northumberland, IV,
1890-95, 286-308.
A scheduled ancient monument as Hunting Lodge.