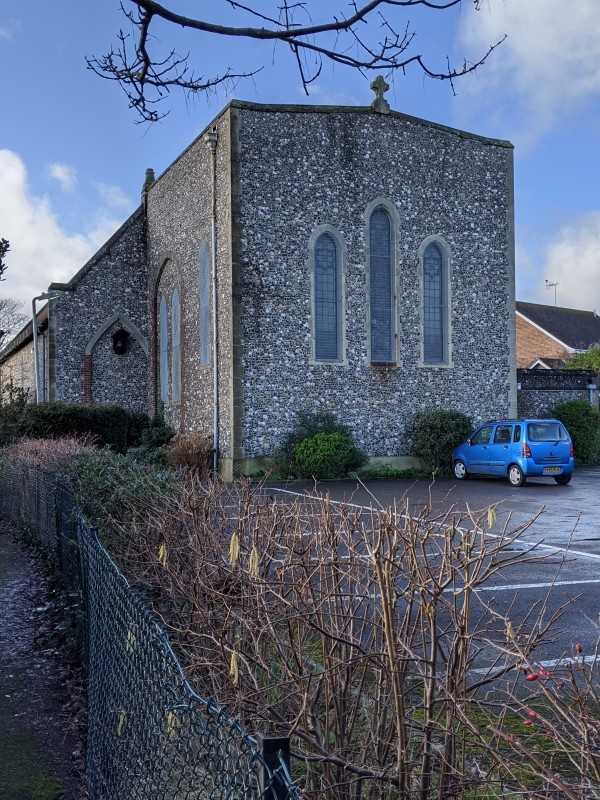 PLAN: The nave is a single wide span but divides into two at the W end, respecting the archaeology of the C13 building. The chancel is taller than the nave and has an almost flat roof. Internal NW chapel; NE vestry block; SW porch.

EXTERIOR: Very little remains visible of the C13 fabric. The N side, which preserves some C13 fabric (seen in internal window splays) is buttressed with four lancet windows. The S side has three lancets and a porch with a round-headed doorway in the E wall. The W end consists of two gables, the S gable set back. The N gable end has a pair of C20 lancets; the S gable has a two-light uncusped C20 plate traceried window. The E wall is almost square with three stepped lancets and a cross at the apex of the roof.

INTERIOR: A remarkable roof from the 1914-1919 phase spans the nave. At the W end it is two separate roofs, springing in the centre from the stub of a wall between the N and S cell of the church. E of the wall, it is a single span of very wide trusses with double rafters and collars, boarded behind with a flat boarded ceiling. The narrower chancel from the 1939-45 phase has closely-spaced moulded cross beams with short braces on moulded corbels. The ceiling between the beams is divided into panels by moulded ribs. Visible C13 evidence is in the splays of one of the N side lancets. One splay includes a Saxon masonry fragment. Timber traceried screen to NW chapel, which has an altar against the W wall. The E wall incorporates a re-sited medieval trefoil-headed piscina.

FITTINGS: Font with a scalloped white marble bowl on a round stem on a square section plinth. Polygonal timber pulpit, commemorative date of 1958, with panelled sides on tall reeded shafts. Sanctuary rail of turned timber balusters. Benches with square-headed ends with canted corners. Interesting stained glass including the NW window, dated 1929 with a portrait head and SW War Memorial window in a C14 spirit.

HISTORY: A church is known to have existed at Durrington in 1086, which was presumably then, as later, a chapel of the parish of West Tarring, to which Durrington was a chapelry. It is thought that the chapel was dedicated to St Nicholas, and from c1260 to St Thomas Becket. It comprised a nave and chancel, apparently of the mid C13. It fell out of use during the Civil War when it was badly damaged and in 1680, in response to a petition, the inhabitants were excused rebuilding the chapel and allowed to attend West Tarring parish church instead. In 1890 an iron mission room was built next to the chapel ruins. In 1914-1919 Durrington was made a parish with its own vicar, and the church of St Symphorian was built, incorporating parts of the walls of the earlier building and respecting its footprint.

REASON FOR DESIGNATION: The Church of St Symphorian is designated at Grade II for the following principal reasons:
* it is of special interest for its simple and austere but attractive flint exterior, and the remarkable wide-span timber roof. Further interest is provided by the stained glass windows.
* the historical interest of the main phases of this church being constructed during the First and Second World Wars, as well as the incorporation of the remains of a ruined C13 chapel, also contribute to its significance.