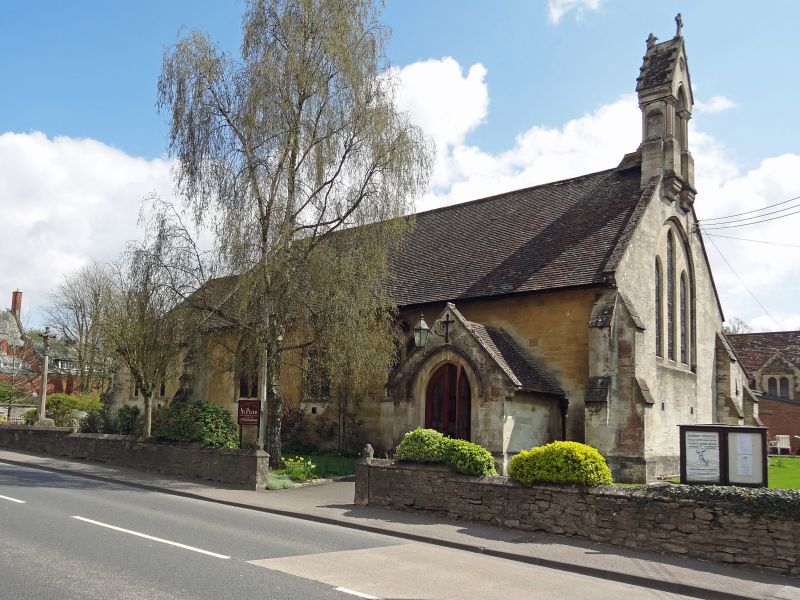 Exterior: St Peter is a plain, low church in a 13th century style, without a tower. The west gable has a bellcote on moulded corbels, with paired attached columns, and crisp mouldings and crockets for adornment. The windows are uncusped, either single lancets as in the chancel, or paired lancets with a plate-traceried quatrefoil, in the north wall facing the road. The small north porch has late 20th century glazed outer doors. The dominant architectural feature is the five-sided apsidal chancel, simply treated with deep buttresses. These continue in the deep gabled transept and along the south side, where a low aisle was added by Weaver & Adye in 1884-5.

Interior: In the nave, an arch-braced collar beam roof. The chancel vault is boarded and painted. The nave arcade is of four arches cut square, with only small hollow chamfers at the angles. There is a continuous outer moulding well above the arches. The piers are quite slim and circular, and the capitals widely splayed blocks which must have been intended for carving. Likewise, the corbels supporting the roof trusses. It can be assumed these elements were left incomplete for lack of funds. The south aisle is low and broad. This enlargement had been anticipated from the start, the aisle arcade being built in 1865 with bricked-up openings.

Principal Fixtures: Sanctuary fittings and altar with a dorsal hanging, were designed by the vicar, the Rev. G.F. George, in 1935. He had trained as an architect. Also his, a good rood group, 1938, on a wrought-iron rood screen of 1902. Victorian choir stalls with wrought-iron frames. The chancel floor has red and cream Minton tiles. The nave is floored in tile and stone, and has the original pine open benches, with rather Puginian inverted-Y framed ends. In the north-east angle of the nave is a simple pulpit of stone columns with top rail. The major adornment is the stained glass, mostly by Powell & Sons of Whitefriars, c. 1880s. At least two (Christ with children, 1878-9, and Christ walking on the water with St Peter, 1885) were designed by Henry Holiday; one in the chancel (Good Shepherd) was designed by J.W. Brown. Other windows, as was usual with Powells, were grafted together from cartoons by various artists. One lancet is obscured by the altar hanging. The fine west window is of three tall lights, in pale blue and gold on a white ground, by Powell & Sons, 1934; from a sketch by James Hogan, Powell's main and best designer at that date. Two further paired lights in the north aisle are by Powells; two angels, 1901, and Christ blessing children, 1908. In the south aisle, mostly late 20th century glass, except for two (Baptism, and Timothy, Eunice and Lois) attributed to Hardman, brought from elsewhere after 1985. The font, in the south-west corner of the nave, has a circular bowl with carved band at the base and emblems in sunk panels. The walls behind it are tiled with an attractive opus-sectile design with Arts and Crafts influence, c. 1900. This may also be by Powell & Sons, who specialised in such work.

History: St Peter was built in 1865-6, largely through the efforts of the Rev. B.C. Dowding, vicar of St. James, to serve the Nursery and Piccadilly areas to the west of Devizes. Development had begun here when the Kennet and Avon canal was constructed c. 1810. At one time Dowding considered fitting out a barge on the canal to serve as a chapel. The church also served the neighbouring militia barracks. The foundation stone was laid in June 1865, and consecration took place on July 17, 1866. The cost was £2,234, a modest sum for that date, reflecting the district for which it was built. The architect William Slater (1818/19-1872) took over the practice of R.C. Carpenter after the latter's early death in 1855. He was joined by Carpenter's son, Richard Herbert as a partner in 1863.

Reasons for Designation:
The church of St Peter, Devizes, is designated at Grade II for the following principal reasons:

* A simple Gothic church built for a working class district, by Slater & Carpenter, 1865-6.