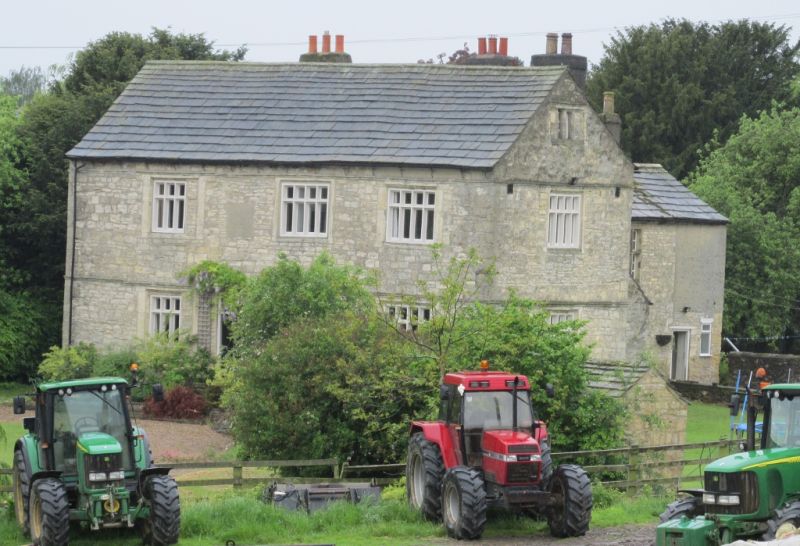 Small manor house, now farmhouse. Later C17 with early addition; altered.
Magnesian limestone rubble with quoins, stone slate roofs. T-shaped plan
formed by 3-unit front range with rear stair turret, and rear wing added in
the angle with this and subsequently extended. Two storeys with attics and
cellars; plinth, dripcourses over both floors of front range; asymmetrical
facade with 3 blocked cellar windows, a window in the centre of each floor of
the left half, 2 windows on each floor of the right-hand half, and a doorway
offset to the left of the centre; 5 steps up to a door with 6 fielded panels
and an overlight with glazing bars; the windows are altered; all formerly
mullioned and transomed and of 8 lights, but replaced with wooden mullions
and transoms, those on the left now reduced to 6 lights. Both gables have
windows similarly altered; left, 10 lights on each floor and 5 in the attic;
right; 8 lights on each floor, and a 4-light stone mullion window in the
attic (outer lights blocked). The rear of the front range has a 3-storey
gabled stair turret with blocked cross-window and 2-light window in the side
wall, altered cross-window and 2-light window in the gable wall, and the
turret partly covers an extruded chimney stack to the right, next to which is
an altered cross-window at ground floor and a blocked 2-light window above
(with wooden lintel). The rear wing added in the other angle of the
stair-turret has inter alia in its outer wall an 8-light window with flush
mullions and transoms and glazing bars, and a lean-to in the angle with the
main range (formerly water tank). Two chimneys at the rear wall of the main
range of this part, one on the ridge of the wing.

Interior: entrance passage leading to rear staircase, to the left of this a
parlour with full height C17 muntin and rail panelling on all sides and
richly-carved overmantel in Renaissance style, and moulded plaster cornice
(plastered beam recently replaced with steel joist); in the other 3 rooms of
this part, matching panelled wainscots; doglegged staircase with closed
string, slim turned balusters, and ramped handrail.