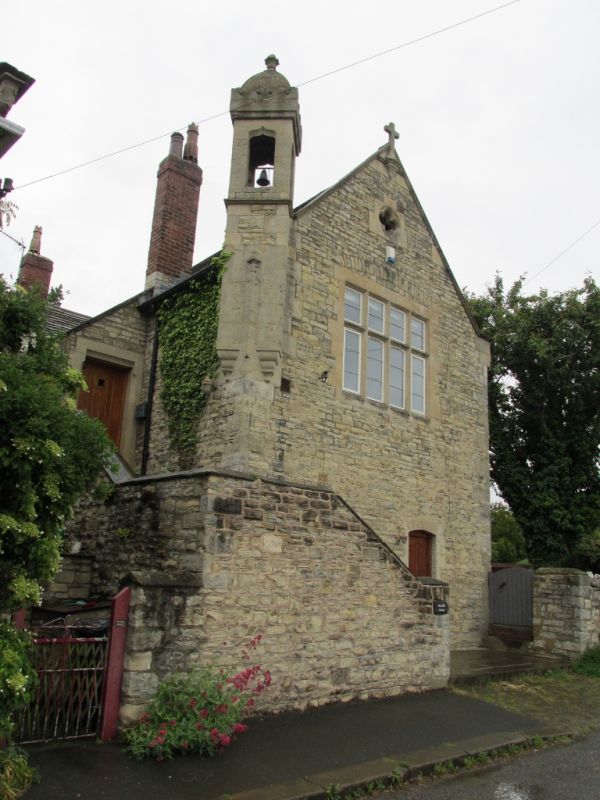 School. c1870, with minor C20 alterations. Coursed limestone rubble with ashlar dressing and stone slate roofs. Single tall brick chimney stack. Quoins. L-pan. Single storey raised over deep basement. Street facade has single basement doorway with segmental head, to left an external stone staircase. Above a large window with 4-light stone mullion and transomed window, under a segmental relieving arch. Above in the apex of the gable an ashlar quatre-foil, the gable has ashlar coping a cross finial and kneelers. To left a square bellcote corbelled out from corner with 4-centre arched openings to each face topped battlements and a square ashlar dome with finial. West front has doorway to boiler house and store, that to left with plank door and window to right under single segmental lintel, above external staircase rises to upper floor. Rear section built on higher ground has projecting small gabled wing with single tall window. North front has single 3-light stone mullion and transom window with two tiny narrow lights in the apex of the gable. East front has three 3-tight ashlar mullion windows on the upper floor, plus later external square brick chimney stack. Interiors are very plain, though main school room retains original roof with original exposed roof trusses, dado rail, original pane[ and plank doors. This building was built as a new schoolroom to the Boys School next door which was founded by lady Betty Hastings.