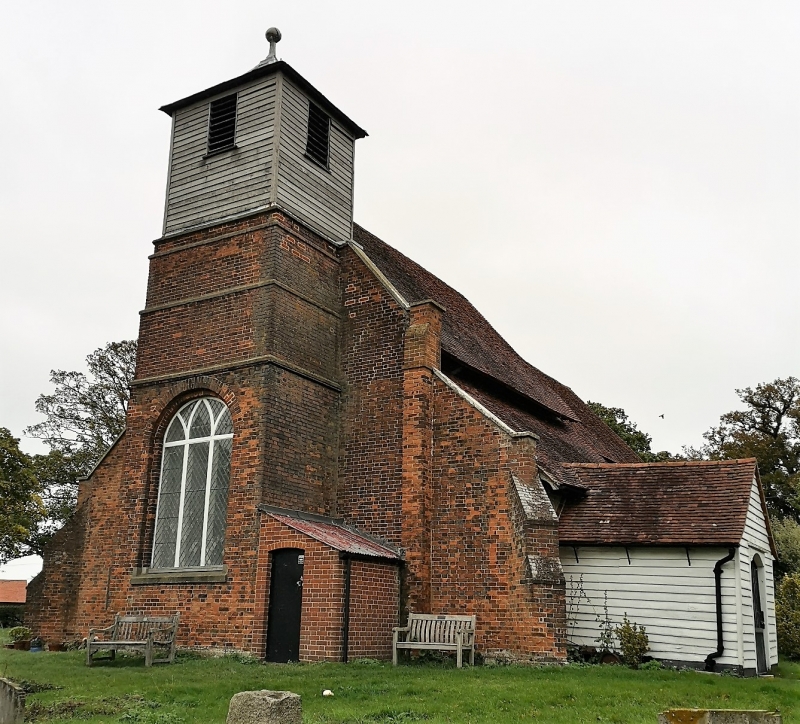 MATERIALS:
The W tower is brick, the aisles are largely flint rubble with stone dressings, the chancel is rendered but may also be flint rubble, and the S porch and top of the tower are weatherboarded. Brick plinths and buttresses. Red tiled roofs.

PLAN:
A very small church. Chancel and very short 2-bay nave with N and S aisles, wider than they are long. W tower and S porch.

EXTERIOR
A very small church, with the nave and aisles wider than they are long. The church is unusual for preserving so much late C18 or early C19 churchwardens' Gothic work unrestored.

The chancel is probably C14 in origin. It is rendered and has a small, brick plinth. The E window is 1876 in a Perpendicular style, but the N and S sides preserve late C18 or early C19 windows with segmental heads, high transoms, and square leaded panes.

The N and S aisles have large C14 Decorated E windows, and the N and S doors are early C14 with two chamfered orders, that on the N with a hood mould, but it possible that these were all reset in the C15 as the arcades inside are of that date.

Both aisles were remodelled and partly rebuilt in the late C18 or early C19, probably at the same time that the tower was built. The N and S windows are late C18 or early C19, and are similar to those in the chancel. The west walls of the aisles were wholly rebuilt in brick, and appear to be a single build with the tower. There are tall brick buttresses at the NW and SW corners of the nave, and there are also brick buttresses at the NE and SE corners of the aisles. The weatherboarded S porch may be another addition of this date.

Like the W walls of the nave and aisles, the W tower is late C18 or early C19 red brick. The tower has a large, 3-light W window with simple Y-tracery. The upper part of the tower has a series of offsets defined by string courses, and the belfry stage is weatherboarded with a pyramidal roof and ball finial. A small, brick chamber in the SW corner between tower and S aisle is a later addition.

INTERIOR:
The interior is plastered and painted. The 2-bay N and S nave arcades are C15 and have chamfered inner orders on polygonal shafts with moulded capitals and continuous outer orders. The late C18 or early C19 tower arch is plain and has a segmental head. There is no chancel arch. The king-post roof in the chancel is late C15. The nave roof is of similar design, and probably similar date, but the whole is set higher than that in the chancel. It was formerly ceiled, and a fragment of a Doom painting was found behind the ceiling when this was removed in 1977. The aisles have lean-to roofs, also formerly ceiled. That on the S is probably largely medieval, that on the N is C20.

PRINCIPAL FIXTURES
Very plain, damaged piscina with a pointed head and chamfered opening in the chancel. The chancel has some encaustic tiles and incorporates two C17 floor slabs.

The N and S nave doors are both old. The N door has wide battens and ornamental hinges and straps dated by Pevsner to the C11 with additions of the C12. It also has a small, iron grill. The S door has four wide battens with an iron grill.

Very fine and well preserved fragment of a late medieval Doom painting found behind the nave ceiling in 1977, and subsequently conserved. The colours are very fresh. The top of Christ¿s head and halo are visible, as are the heads of angels carrying the nail and the spear from the Instruments of the Passion.

An unusual wooden war memorial for WWI, with a carved ogee top and an inscription recording that it was 'executed and erected by a parishioner' in 1920.

HISTORY
Buttsbury the place is in the Domesday book of 1086, but the church is not mentioned, although it was not uncommon for churches to be omitted. The approximately 1 ½ square plan of the nave without the aisles may suggest an Anglo-Saxon origin for the church. The apparently C11 and C12 ornamental metalwork on the N door is also evidence of a church of this date on the site. The church may have Anglo-Saxon origins, with the core of the nave and the metalwork on the door of that date. The chancel and aisles may be C14 in origin, but the whole was remodelled in the C15 when the present arcades were built and the nave and chancel reroofed. The church was held by the nuns of St Leonard's Barking, and was sufficiently important, despite its small size, to have a very large parish with at least one dependent chapel at Stock (All Saints). The church is isolated, and there is no longer a village at Buttsbury. The W end of the church, including the tower and the W ends of the aisles were rebuilt in brick in the late C18 or early C19, perhaps after 1783 when the parish was united with Ingatestone. There was some restoration in 1876 when the E window was installed. The church was in poor condition by the early C20 and there was restoration in 1923 when the aisle E windows were discovered under blocking and restored. There was yet more restoration in 1949 following damage in WWII and again in 1977 when the nave roof was uncovered.

The parish was united with Ingatestone in 1783, which may provide a date for the Georgian rebuilding. In 2004 it became a unified benefice with Margaretting and Mountnessing.

REASONS FOR DESIGNATION:
The church of St Mary, Buttsbury, Stock, Essex is designated at Grade II* for the following principal reasons:
* Good surviving medieval fabric, including C15 nave arcades and C14 doors and windows.
* Unusual plan of considerable width.
* The nave and chancel roofs are excellent survivals of the C15.
* Unusual survival of C18 or early C19 churchwardens¿ Gothic work including W tower and nave and chancel windows, creating a highly picturesque, multi-phased effect.
¿ Important early metal work, probably of the C11 or C12 on the N door.