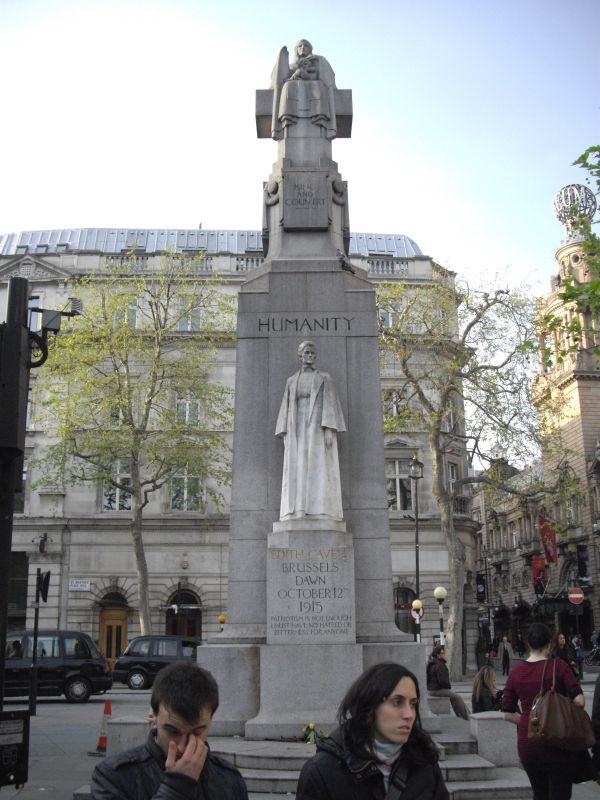 DESCRIPTION: nurse Cavell’s statue, clad in stylized nurse’s uniform as though facing her execution, stands on a two-stage plinth inscribed BRUSSELS DAWN OCTOBER 12th 1915: beneath, in smaller letters, is added PATRIOTISM IS NOT ENOUGH I MUST HAVE NO HATRED OR BITTERNESS TOWARDS ANYONE. Behind is a tall pylon, severe in detail, inscribed on each face, at frieze height, HUMANITY / SACRIFICE / DEVOTION / FORTITUDE. On the rear of the memorial is a relief of a lion, standing triumphant over a serpent: this symbolized the Britain’s overcoming envy, malice, spite and treachery. Below this is a hammer-beaten panel, showing the granite in its roughest state. The upper section is cruciform in shape, and comprises a sculptural group of a woman and infant, depicting Humanity: over the folds of her skirt is the Geneva cross. One source (Malvern, p.224) explained that the infant depicted the smaller nations of Belgium and Serbia, the protection of which had triggered the war. To the front of the upper shaft, between wreaths, is the inscription FOR KING AND COUNTRY. The monument stands on a three-stepped base with low square pyramid-capped posts to the corners.

Swardeston, Norfolk-born Edith Cavell (1865-1915) trained as a nurse at the London Hospital, and from 1907 was director of a pioneering nurses’ training school in Brussels. Following the rapid German invasion of Belgium in 1914, Cavell became involved in helping allied soldiers, caught behind enemy lines, and Belgians desirous to enlisting, to escape to Britain through Holland. Arrested in August 1915, Cavell made a confession and was shot (along with Philippe Baucq, another leader of the escape organization) on 12 October 1915. Diplomatic efforts were made to spare her life, particularly by the US Ambassador, but in vain. Her execution, presented as a deed of German barbarism (although in clear contravention of German military code of occupation, and of the first Geneva Convention) prompted considerable revulsion: this was fully exploited for propaganda purposes, becoming a rallying call for recruitment to the Allied cause. Regarded as the most renowned female casualty of the First World War.

Cavell’s memorial was one of the very first memorial projects of the First World War, being suggested in October 1915 soon after her death, and promoted by The Daily Telegraph. The noted sculptor Sir George Frampton RA (1860-1928), best known for his Peter Pan statues and for the lions outside the British Museum, and the leading exponent of the New Sculpture, undertook the project for free. He based his likeness of Cavell on her sister; wartime shortages of marble delayed carving the figure. Unveiled by Queen Alexandra on the 5th anniversary of Cavell’s execution, the memorial attracted a mixed reception. The National Council of Women successfully petitioned the Office of Works to have Cavell’s words of forgiveness, which were told to a priest on the eve of her execution, included on the memorial: these were duly added in the summer of 1924.

After the Armistice, her body was exhumed from Brussels and, after a memorial service in Westminster Abbey, was re-buried in Norwich Cathedral Close. Another memorial to Nurse Cavell is located at Life’s Green, Norwich Cathedral, by Henry Pegram. Monuments to her in Brussels, Paris (destroyed 1940), Toronto and Melbourne, Australia testify to the strength of feeling her execution provoked across the world.

The memorial is in the care of English Heritage.

The Edith Cavell Memorial is listed at Grade I for the following principal reasons:
* Historic interest: the memorial commemorates one of the most famous civilian casualties of the First World War, and stands out as a rare (and very early) war memorial to an individual woman. Genuine victim and propaganda cult figure, Cavell’s reputation continues to resonate;
* Sculptural interest: Frampton is ranked amongst the foremost sculptors of his day, and the nurse’s effigy and symbolic group of Humanity each portray his ability to convey character and pathos;
* Design interest: Frampton’s granite setting was recognized as remarkable in its day for its austerity and monumentality, and anticipated future developments in modern commemorative sculpture;
* Group value: prominently sited outside the National Portrait Gallery, the memorial continues northward the important ensemble of statuary in Trafalgar Square.