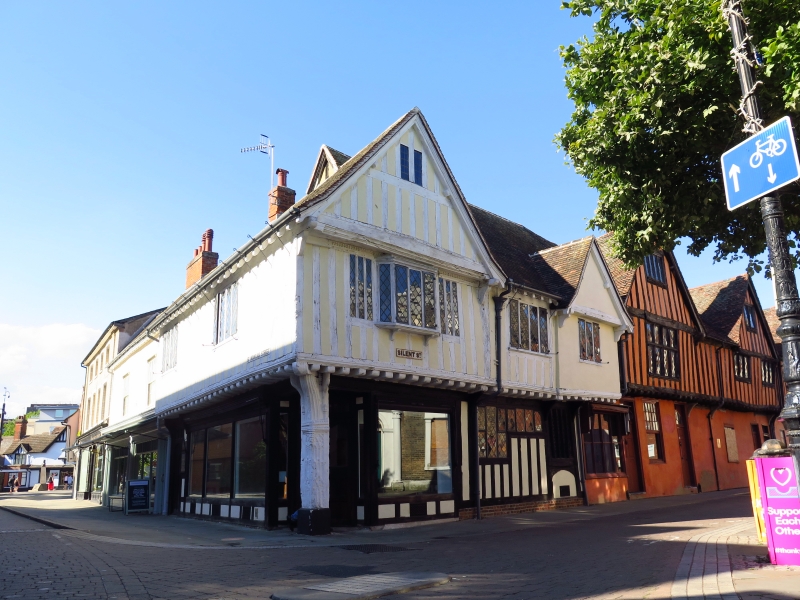 Including No 47 St Nicholas Street.
A C15 timber-framed and plastered house with a cross wing at the south west
end. It stands on the corner of Silent Street and St Nicholas Street with
a return front on St Nicholas Street (No 47). The upper storey is jettied
on both fronts and the timber-framing is exposed. The gable of the cross
wing is also jettied. The main block has a small jettied gable at the north-east
end. 2 storeys, attics and cellars. 3 window range on Silent Street and
2 window range on St Nicholas Street, casements with lattice leaded lights.
The crosswing has a range of casements on the 1st storey with a central oriel
bay in C15 style. The attics are lit by a window in the gable. The ground
storey has a C20 corner shop in period style with the entrance cut out behind
a fine carved corner post. The ground storey of the main block has a window
with restored oak mullions, and below it a 4-centred blocked opening with
carved spandrels. The whole building has been restored. The interior, on
the 1st storey, has a fine plaster ceiling decorated with fleur-de-lis and
Tudor roses. Roofs tiled. On the west side of the crosswing in St Nicholas
Street there is a plaque which records that the birthplace of Wolsey's parents
formerly stood on the opposite side of the street.