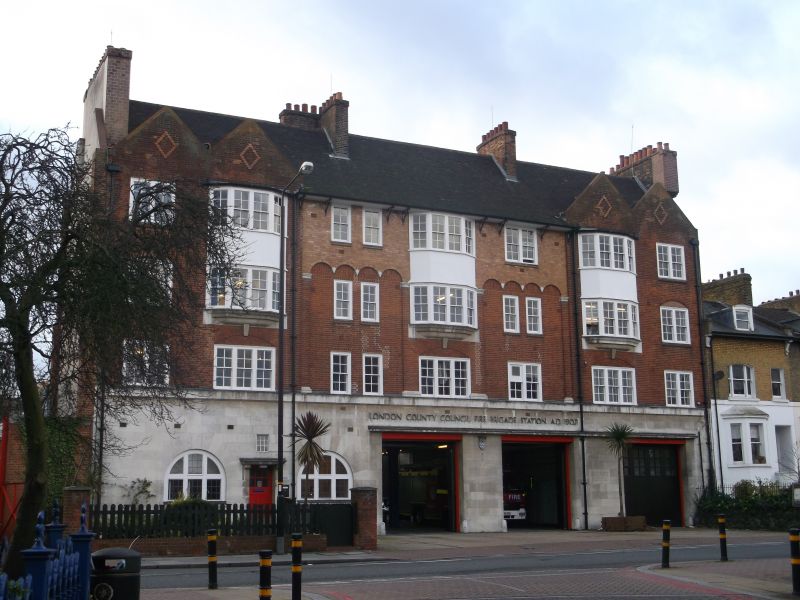 PLAN: Rectangular 4-storey block with ground-floor fire station and flats above, with stair to rear at N end. Internal plan much altered.

HISTORY: Fire services in London emerged principally from the need for insurance providers to limit their losses through damage to property in the period after the Great Fire of 1666. Initially, each insurer maintained a separate brigade that only served subscribers until the foundation of an integrated service in 1833, funded by City businesses. In 1866, following an Act of Parliament of the previous year, the first publicly-funded authority charged with saving lives and protecting buildings from fire was founded: the Metropolitan Fire Brigade, initially part of the Metropolitan Board of Works. The earliest MFB fire stations were generally plain brick and few pre-1880 examples survive. In 1880s under the MFB architect Robert Pearsall, fire stations acquired a true architectural identity, most notably in the rich Gothic style typical of Victorian municipal buildings such as Bishopsgate. It was the building boom of the 1890s-1900s however that was to transform fire station architecture and give the Brigade some of its most characterful buildings. In 1889, the fire brigade passed to the newly-formed London County Council, and from 1896 new stations were designed by a group of architects led by Owen Fleming and Charles Canning Winmill, both formerly of the LCC Housing Departmen, who brought the highly-experimental methods which had evolved for designing new social housing to the Fire Brigade Division (as the department was called from 1899), and drew on a huge variety of influences to create unique and commanding stations, each built to a bespoke design and plan. This exciting period in fire station design continued to the outbreak of WWI, although there was some standardisation of design in the period.

REASON FOR DESIGNATION: Tooting Fire Station is designated at Grade II for the following principal reasons:
* It ranks among some of the best examples of a remarkable group of fire stations built by the LCC between 1896-1914, each executed to a bespoke design, which are widely admired as being among the most accomplished examples of LCC civic architecture of this rich and prolific period;
* A pleasing and well-composed LCC fire station in the Arts-and-Crafts manner. It exhibits the quality of materials and attention to detail which are the hallmarks of LCC design; the principal elevations are virtually intact.