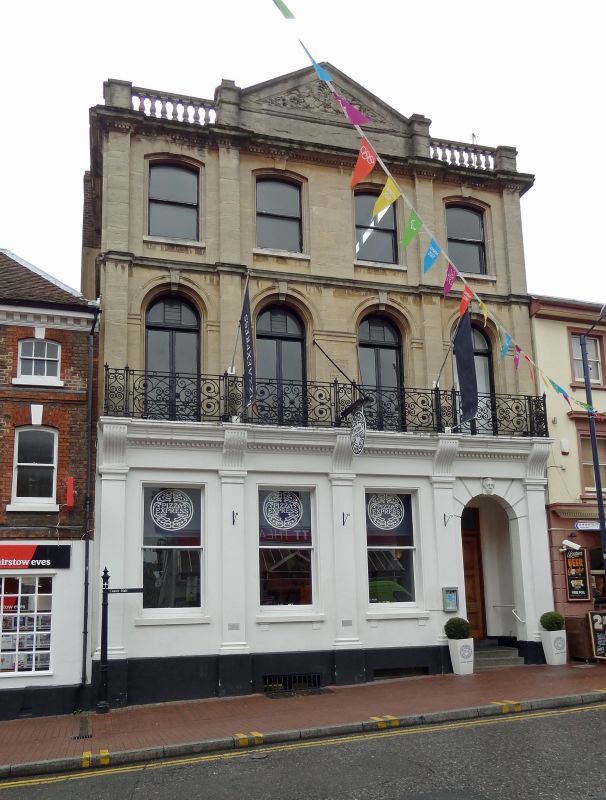 Club premises. Dated 1883. Ashlar, painted on front of ground floor. Roof
concealed behind parapet appears to have clerestory lights to central span.
Plan not investigated - entrance to right to front. Italiante style.
Exterior: 3 storeys and basement. Symmetrical 4-bay front. The ground floor
has rusticated round-headed doorway to right with human mask in the keystone.
Panelled double doors and fanlight and 3 windows to left, the bays divided by
pilasters with large fluted consoles to the dentilled cornice above which
supports a balcony with an ornate wrought iron balustrade to first floor. The
first and second storey has 1:2:1 bay front with a moulded string course at
second floor level breaking forward around the pilasters which divide the
bays; and crowned by a dentilled cornice with a balustraded parapet and
pedimental centrepiece, the tympanum of the pediment carved in stone with 2
shields surrounded by trailing foilage. The tall first floor windows are
round-headed with moulded architraves, keystones and imposts. The ground and
second floor windows are C19 sashes without glazing bars and the first floor
are French casements. The Centre pier between the first floor windows has a
stone inscribed "This stone was laid February 9th 1983 by ......" (view of
name obscured by balustrade).
Interior: not inspected but might contain some of the club fixtures and other
original features.
According to Kelly's Directory 1927 this was the premises of the Mid-Kent
Conservative Club.