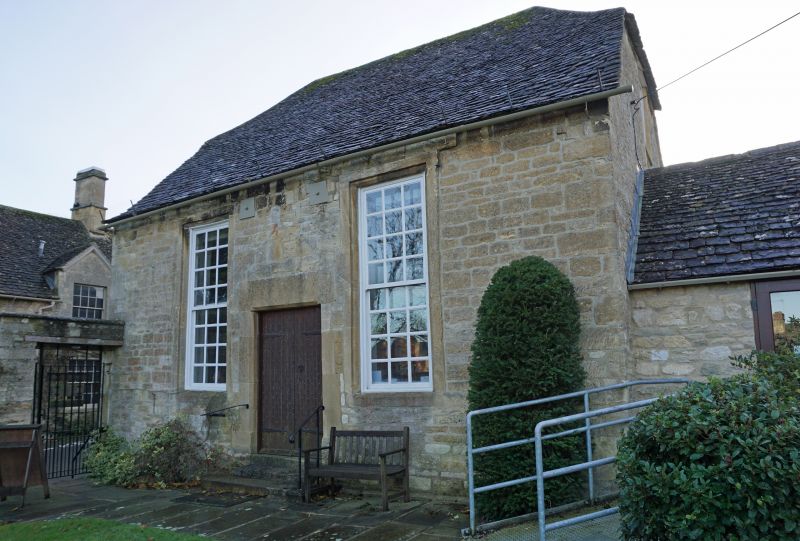 Quaker meeting house, built in 1709, possibly to a design by Edward Strong. An attic room was created around 1730. A single-storey extension was added in 1981; this extension is excluded from the listing. Burial ground wall of C18 date to the north-east.

PLAN: located on the west side of Pytts Lane, the building consists of a gabled meeting hall, rectangular in plan. The late-C20, single-storey extension, not included in the listing, is built against the west elevation.

EXTERIOR: the main entrance is to the north, facing a small burial ground. This presents a symmetrical elevation with a central nail-studded door with strap hinges and a heavy ashlar stop-chamfered surround. The entrance is flanked by tall sash windows, twelve panes over twelve, in rebated surrounds. Inside, the wide ovolo-moulded glazing bars have square blocks at the intersections. The eastern gable end has a later sash window with glazing bars to the attic, and evidence of a blocked window immediately below. The south elevation is blind, while the west elevation also has a glazing bar sash window to the attic. Immediately below this is an original nine-over-nine sash window in a rebated surround with (like those on the north elevation) thick glazing bars with square blocks at the internal intersections. Below this is the double-hipped roof with central valley (with skylights in the southern slope) of the 1981 addition, a single-storey structure of complementary design and materials.

INTERIOR: the interior measures approximately eight metres by seven metres, with a loft or gallery along the south and west sides, reached by a stair of two flights at the north-west corner; this has a partially closed balustrade, and ball finials to the newel posts. The gallery is supported on plain square posts, and the open gallery front is similarly plainly treated. Such plain detailing is difficult to date, but is assumed by most commentators to be original. The ground floor space has a boarded floor and a high horizontal boarded stained pine dado with woodwork marks, rising on the east side where it formerly provided the back of the stand, which was removed in 1947. At the west end a door connects to the WCs, kitchen and library/meeting space created in the addition of 1981. A further stair at the south-west corner leads from the loft to the attic space; this dates from circa 1730, and is similar in detail to the lower stair. The attic space has a substantial exposed collar purlin roof structure, the timbers evidently reused at least in part. The space is lit by the sash windows at either end.

SUBSIDIARY FEATURES: at the north-east corner the building is adjoined by a tall ashlar gateway with stone capping and an iron gate with an open transom bearing the date 1709. This is reached via a flight of five stone steps, with modern tubular steel handrails, and forms part of a high rubble stone boundary wall with stone capping running north along Pytts Lane.

* Pursuant to s.1 (5A) of the Planning (Listed Buildings and Conservation Areas) Act 1990 (‘the Act’) it is declared that the aforementioned late-C20 single-storey western extension to the meeting house is not of special architectural or historic interest.

Fox asserted that no one place was holier than another, and in their early days, the new congregations often met for silent worship at outdoor locations; the use of in member’s houses, barns, and other secular premises followed. Persecution of non-Conformists proliferated in the period, with Quakers suffering disproportionately. The Quaker Act of 1662, and the Conventicle Act of 1664, forbade their meetings, though they continued in defiance, and a number of meeting houses date from this early period. Broad Campden, Gloucestershire, came into Quaker use in 1663 and is the earliest meeting house in Britain,although it was out of use from 1871 to 1961. That at Hertford, 1670, is the oldest to be purpose built. The Act of Toleration, passed in 1689, was one of several steps towards freedom of worship outside the established church, and thereafter meeting houses began to make their mark on the landscape. Throughout the C18 and early C19 many new meeting houses were built, or earlier buildings remodelled, with ‘polite’, Classically-informed designs appearing, reflecting architectural trends more widely. However, the buildings were generally of modest size and with minimal ornament, although examples in urban settings tended to be more architecturally ambitious.

Quaker meeting houses are generally characterised by simplicity of design, both externally and internally, reflecting the form of worship they were designed to accommodate. The earliest purpose-built meeting houses were built by local craftsmen following regional traditions and were on a domestic scale, frequently resembling vernacular houses; at the same time, a number of older buildings were converted to Quaker use. From the first, most meeting houses shared certain characteristics, containing a well-lit meeting room with a simple arrangement of seating facing a bench for the elders; in time a raised stand became common behind this bench, for travelling ministers. Where possible, a meeting house would provide separate accommodation for the women’s business meetings, and early meeting houses may retain a timber screen, allowing the separation (and combination) of spaces for business and worship. In general, the meeting house will have little or no decoration or enrichment, with joinery frequently left unpainted.

After 1800, it became more common for meeting houses to be designed by an architect or surveyor. The Victorian and Edwardian periods saw greater stylistic eclecticism, though the Gothic Revival associated with the Established Church was not embraced; on the other hand, Arts and Crafts principles had much in common with those of the Quakers, and a number of meeting houses show the influence of that movement.

The Burford meeting house was registered in 1709 and superseded one at Barrington, which lies two miles to the west. Quarries at Barrington were owned by the Strong family, which produced several generations of master masons who worked on the post-fire rebuilding of the City of London. One of these, Edward Strong (1652-1724) worked closely with Wren on the rebuilding of St Paul’s Cathedral, for which he supplied a large quantity of Burford stone. It has been suggested that Strong might have been the architect/designer of the meeting house, but the evidence for this is uncertain.

The building was designed with an internal loft or gallery. Later changes around 1730 involved the creation of an attic room for women’s business meetings, reached by a stair from the loft. The meeting house closed in 1854, although it continued to be used occasionally by Friends. In 1884 it was let to the Primitive Methodists, but returned to Quaker use for about twenty years around the turn of the C20. In 1947 it was in use as a youth club, when the stand was removed. Regular meetings for worship resumed in 1955. A matchboard and corrugated iron porch was removed in the course of renovation in 1981, when a single-storey extension was added at the west end (architect: Elizabeth Rowlands).

A small burial ground, without any markers, is situated to the north of the meeting house.

Burford Quaker Meeting House, dating from 1709, is listed at Grade II* for the following principal reasons:

* as a very well-preserved, early-C18 meeting house, reflecting local vernacular building traditions, which illustrates the resources and confidence of the Friends following the Act of Toleration of 1689;
* the interior is particularly notable with its unusual open gallery and other surviving C18 fittings and slightly later women’s meeting room in the attic which reflects the congregation’s historic mode of worship.

* the meeting house is a relatively early example, which has been in nearly continuous use for worship since 1709;
* the design has been attributed to Edward Strong, a mason who worked closely with Sir Christopher Wren on the rebuilding of St Paul’s Cathedral, though this is unconfirmed.

* with the attached C18 burial ground wall to the north-east.