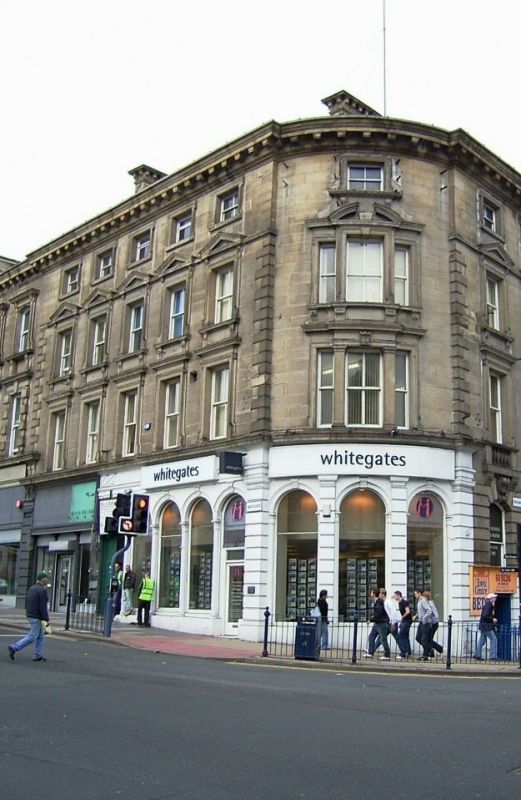 WESTGATE
1.
5113
(North Side)
Nos 28 to 32 (even)
SE 1416 NW 1/1371
II GV
2.
Mid C19. Ashlar. Hipped slate roof. 4 storeys. Deeply moulded cornice with
modillions. Raised quoins. 5 ranges of sashes and rounded corner to Railway
Street. Nos 28 and 30 have very fine contemporary shopfront with horizontally
rusticated piers, round-arched windows with moulded voussoirs and keystones
separated by fluted columns with Tower of the Winds Capitals: 12-panelled door
with semi-circular fanlight at west end. No 32 has similar columns, but the
upper part is obscured by modern fascia. 1st floor windows have moulded surrounds,
pulvinated friezes and cornices. 2nd floor windows are linked to them by fluted
consoles they have moulded surrounds and triangular pediments on consoles.
3rd floor windows have shouldered moulded surrounds. On the corner windows
are tripartite 1st floor window has square Tuscan columns as mullions, gadrooned
keystone and entablature: 2nd floor window linked to it by fluted consoles;
it has moulded surround with entablature and central light has further moulded
surround with keystone and broken segmental pediment 3rd floor window has
shouldered moulded surround, with festoons at sides, and moulded sill.